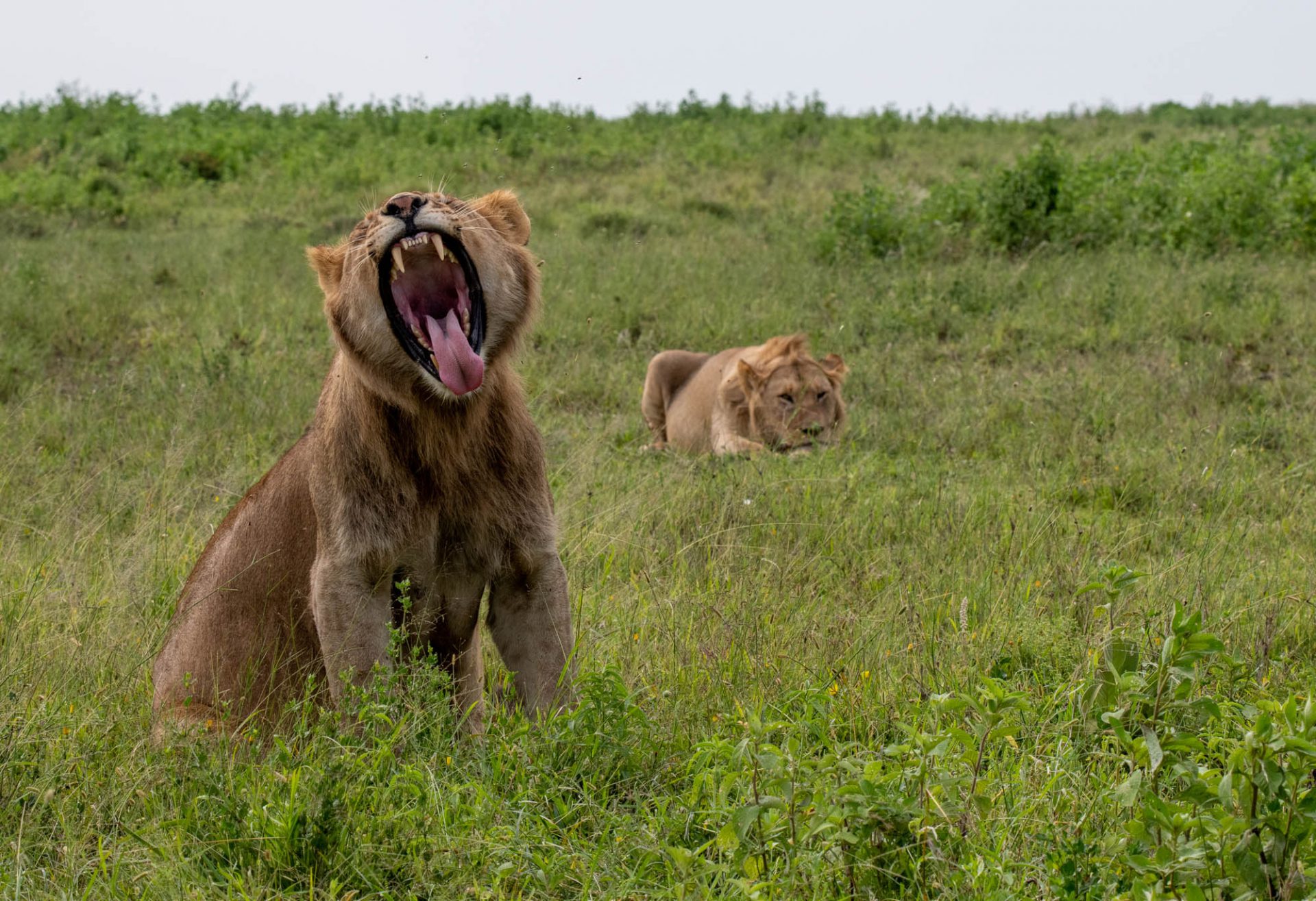 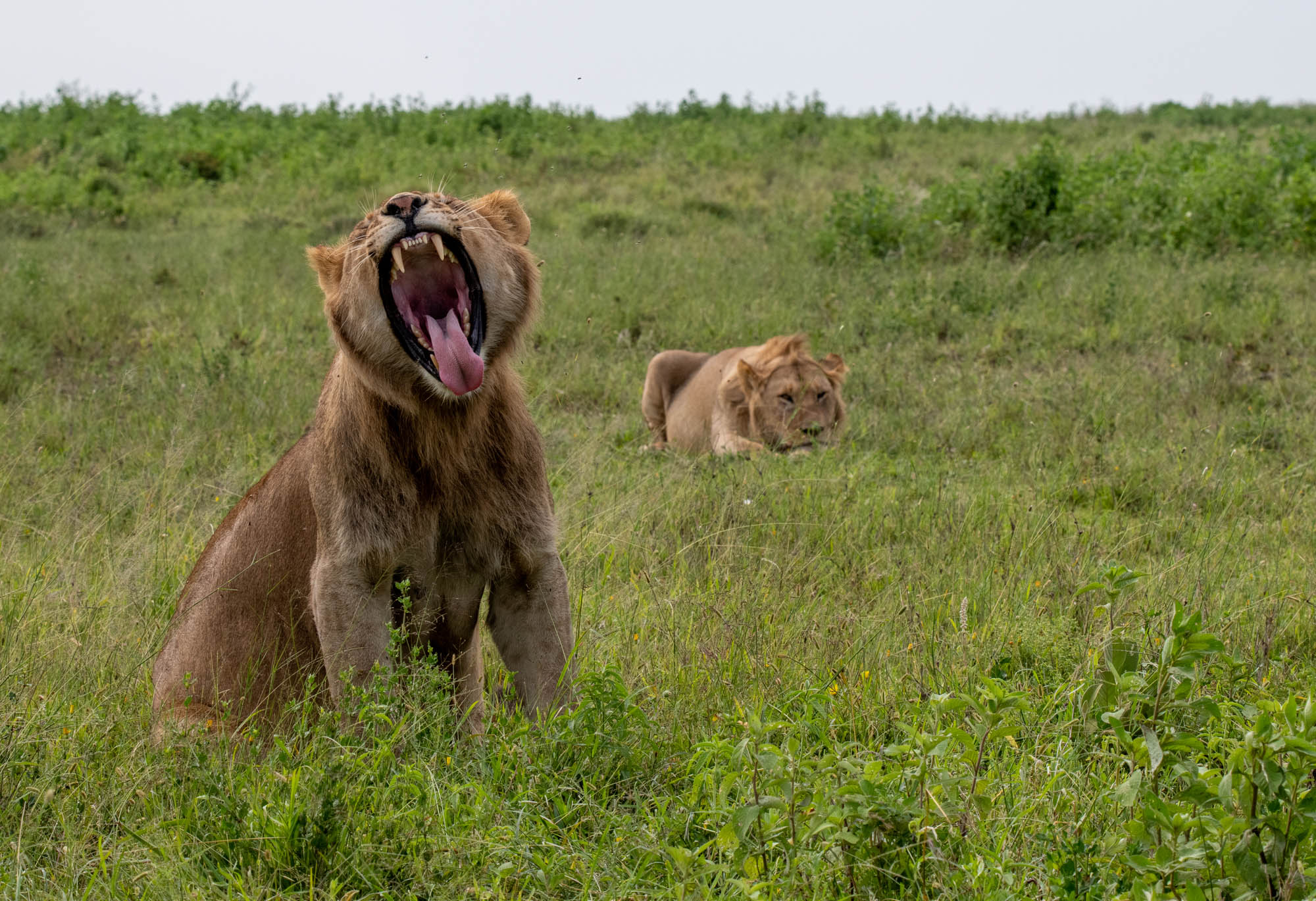 On my last night at Sanctuary Kusini Camp in the Southern Serengeti this February, I heard lions roaring from my tent.  As I found out the following morning,  the cats had spent the night on a rocky outcrop a few hundred meters outside of camp.  Close enough to be heard and appreciated, far enough not to be a threat. 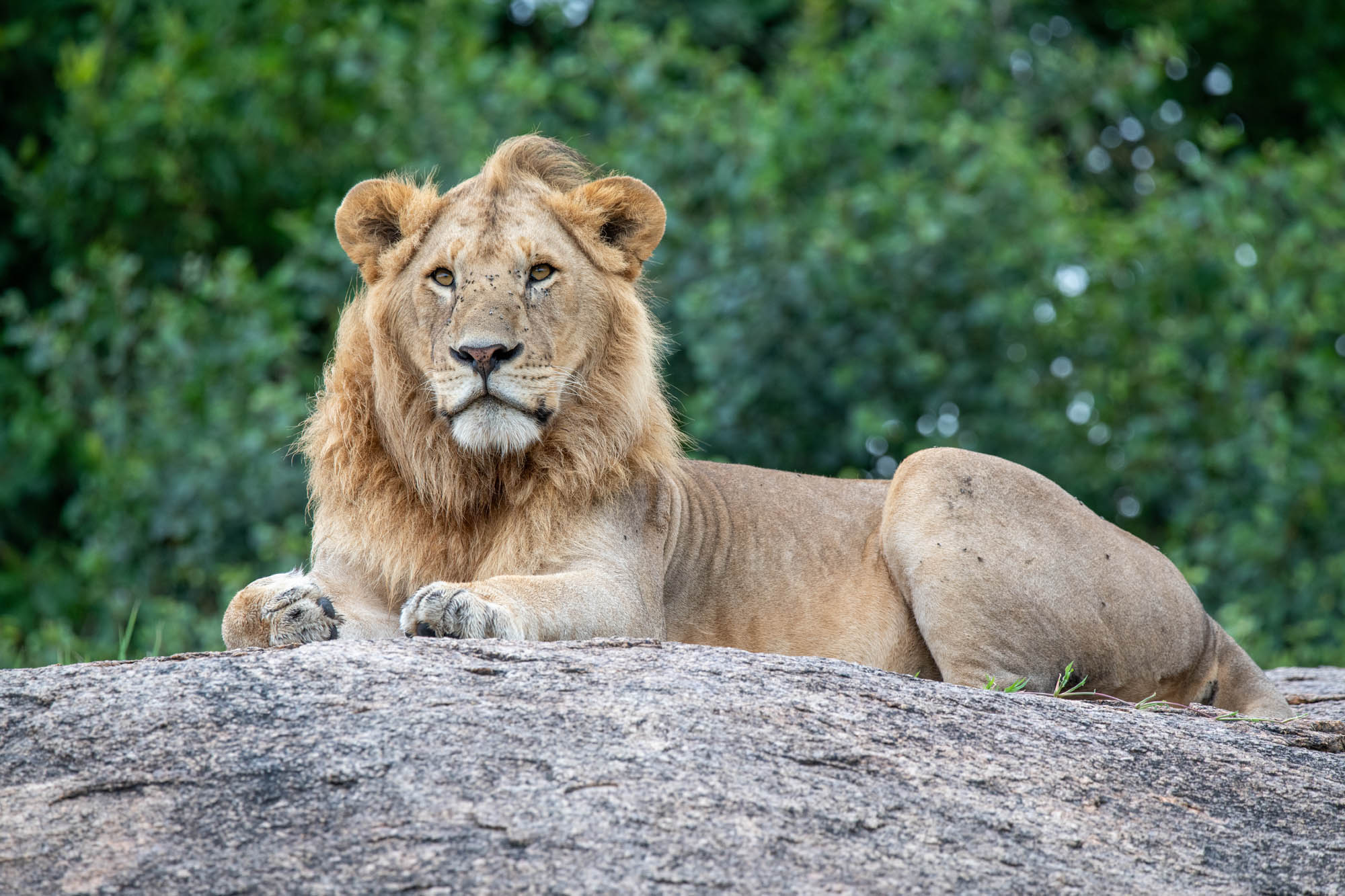 Listening to lions proclaiming their territorial dominance, is always a memorable moment on safari.  Whether they’re close enough to make your chest reverberate or calling from a mile away, the roaring of lions in the bush cuts right to the heart of the safari experience.  Exciting, unpredictable, with just a hint of danger - and a promise of things to come.  A pursuit, a hunt - maybe even a kill. 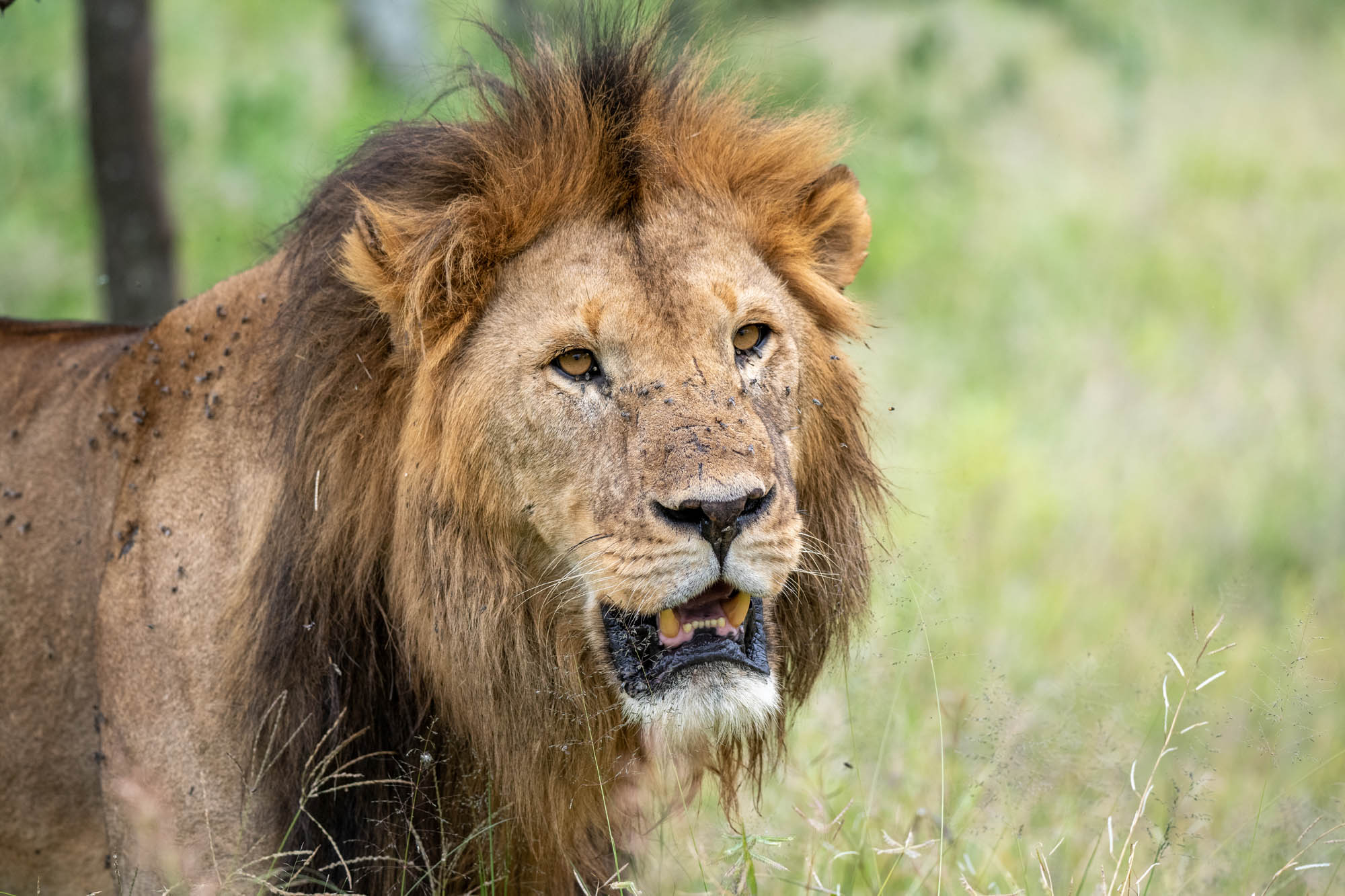 A short flight of not even 15 minutes had brought me from Ndutu to Serengeti South airstrip, from where it was a 20-minute drive or so, to Sanctuary’s Kusini Camp.  I had long wanted to make my way here and as it turned out, my highest expectations were exceeded. 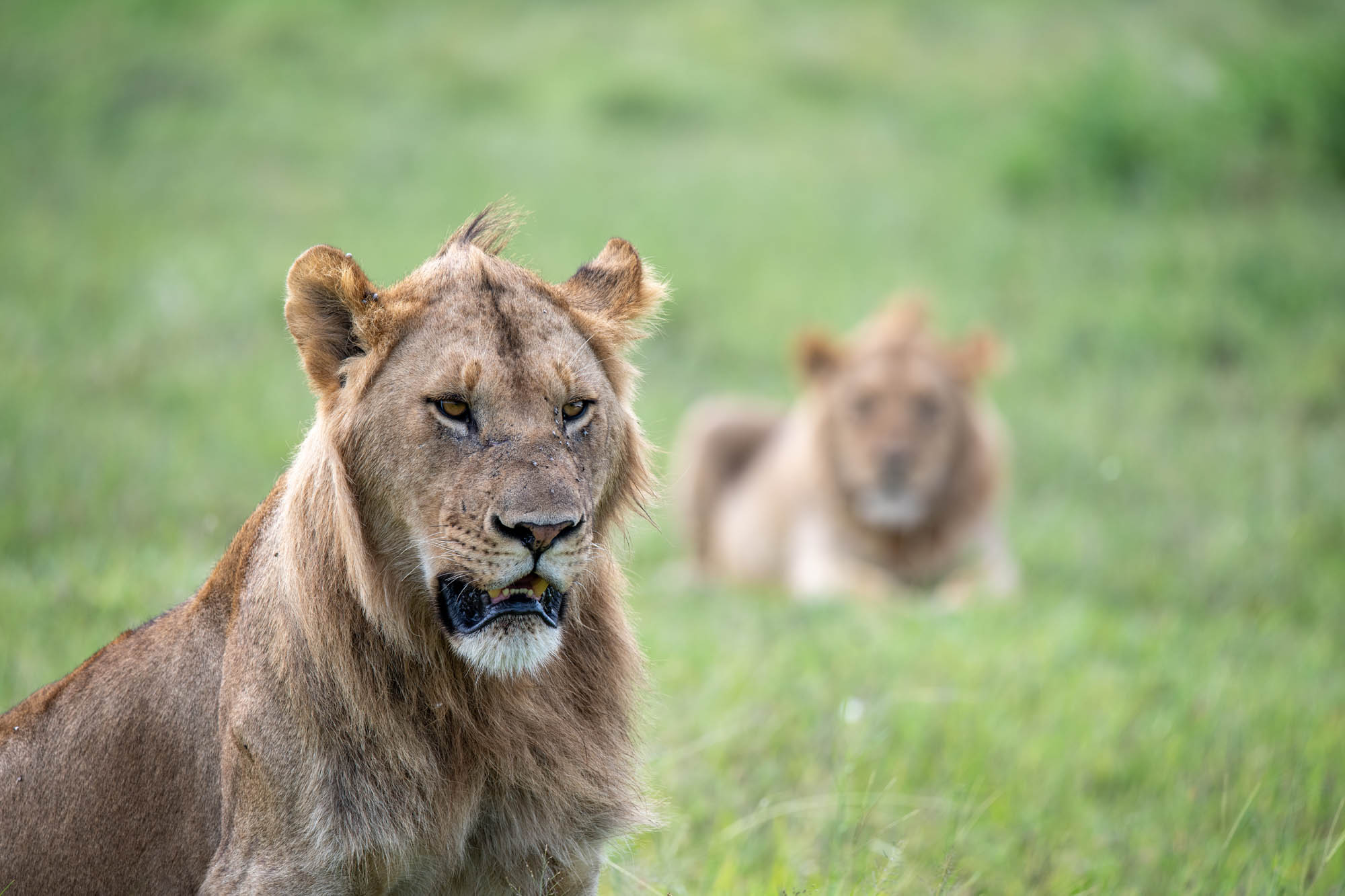 Lions and wildebeest on the move

Arriving before 9 am in the morning into the airstrip, meant that my guide Emmanuel Mbramba and I had plenty of time to explore the area, before having to return to camp for lunch.  Our objective for the morning was to try to find some cheetahs - for which Kusini is known - but things worked out differently.  One of our first sightings was a coalition of three young male lions, which seemed to be in great condition.  They were clearly benefiting from the abundance of prey animals - particularly young wildebeest calves - present in the Serengeti during the migration. 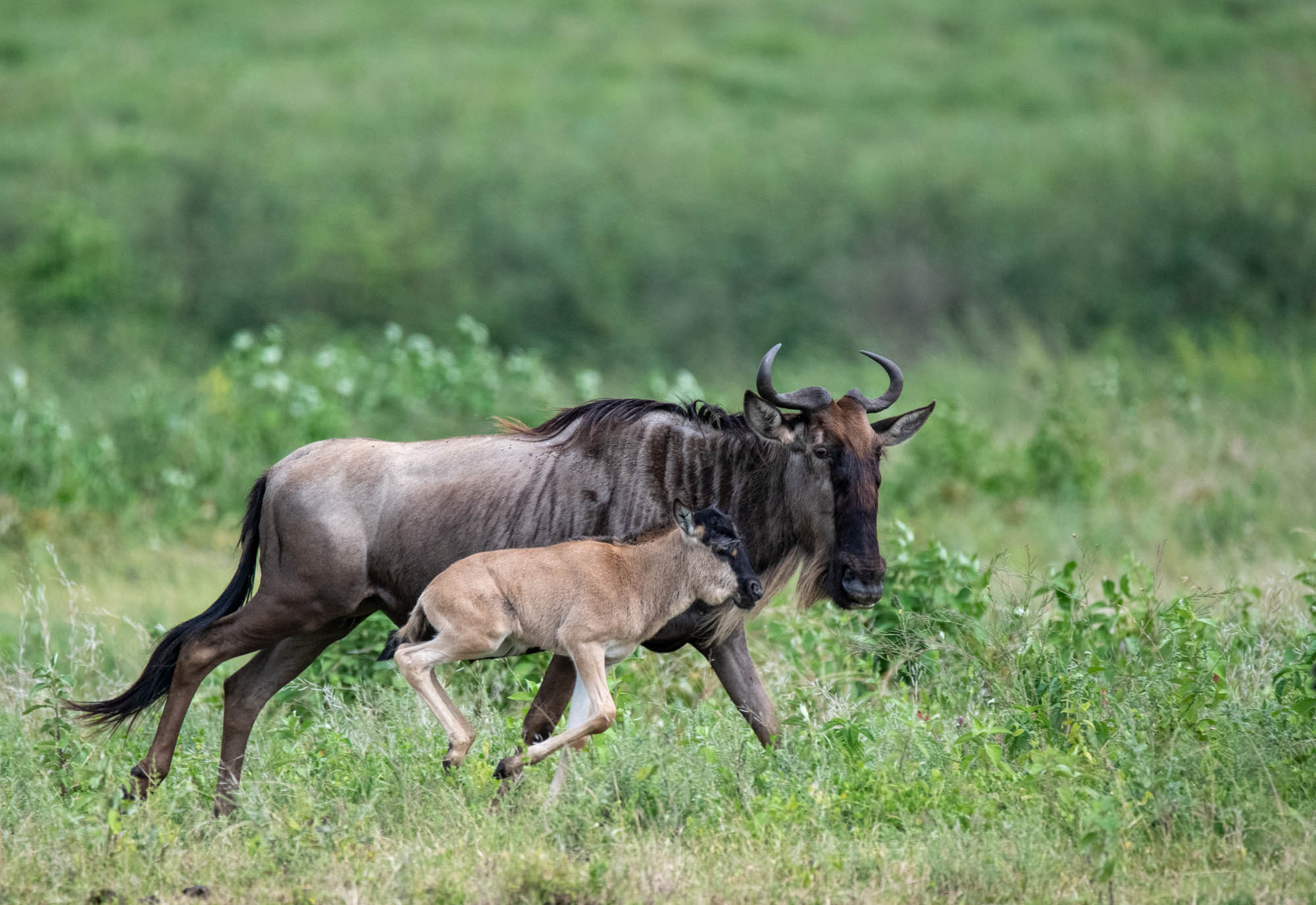 From the lion sighting we drove to the nearby open plains where I witnessed an awesome wildebeest ‘run by’ with literally several thousand wildebeest thundering past us in a more or less unbroken line, from left to right, for what seemed like at least 20 minutes.  On and on they came, sometimes a bit slower and then building up to a full on gallop.  I thought at the time - and in recollection even more so - that it rivaled a river crossing in sheer impact and drama.

Many hundreds of photographs later, we made it to Kusini camp for a delicious lunch:  a particularly nice chicken salad with chickpea and banana salads on the side. 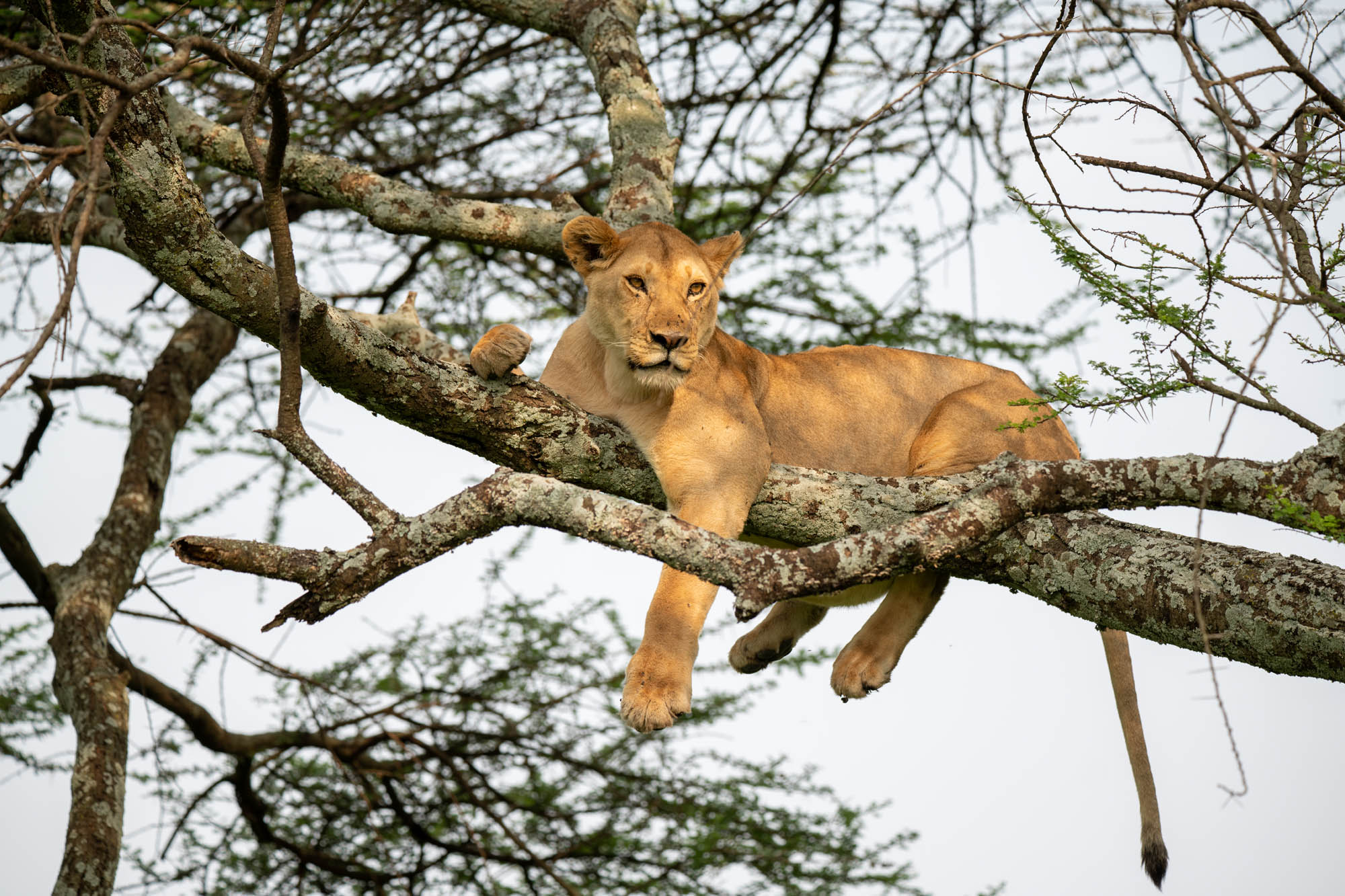 The afternoon game drive concentrated on a woodland area where we found several more lions - four of them - in trees.  How odd that I would not see a lion in a tree in 30 years and then see nine of them doing that in a matter of two consecutive days.  In two different parts of the Serengeti.  One of the lions - a subadult male - was almost comically uncomfortable in the odd position he had assumed in a tree.  Quite high up - almost in the canopy - but with only his chest and front paws resting on a branch.  His hind legs were fully extended and apparently bearing a considerable amount of his weight. 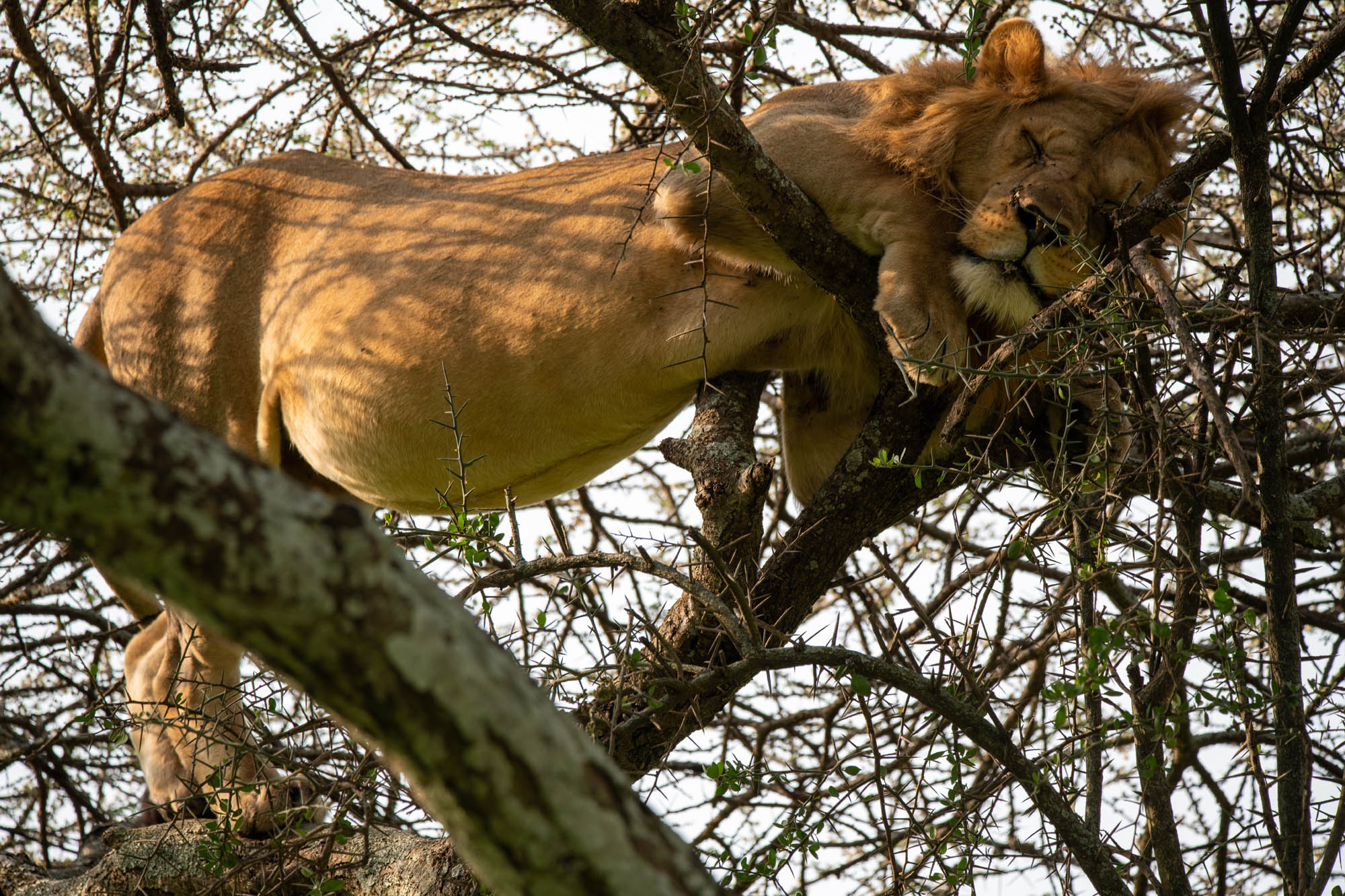 Getting a good photo of a lion in a tree is challenging.  For one thing, the animals are often obscured by branches and leaves.  There is the much dreaded backlighting issue to contend with (getting good exposure on a dark object against a light background) and most importantly, it is difficult to illustrate the actual height to which the lions have climbed.  There’s no real solution to any of these issues, except to get as many exposures as you can from different viewpoints and angles. 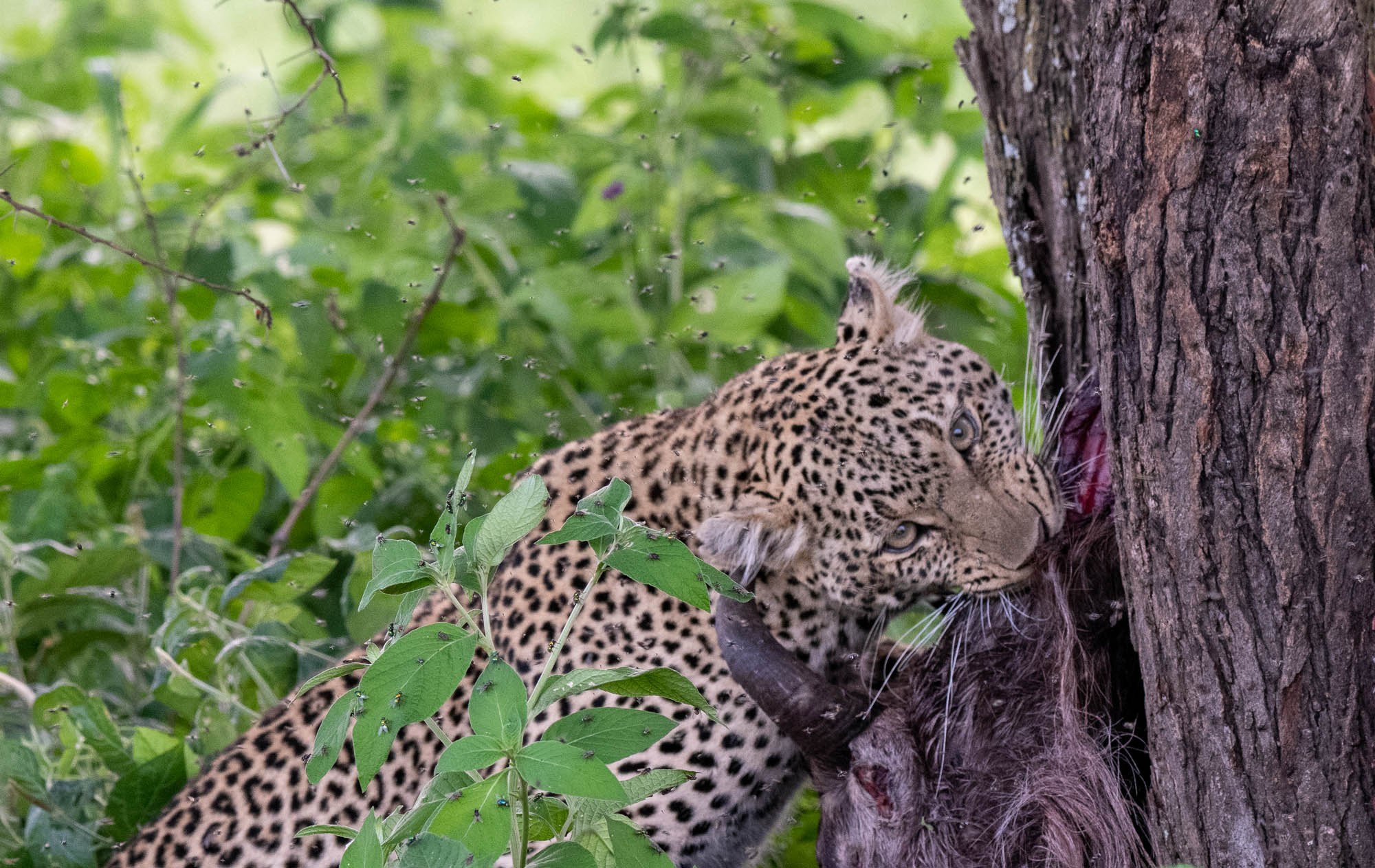 Soon after, Emmanuel found a female leopard and her young cub, also in a tree.  Initially, we saw only the baby which was not shy at all.  It clambered around for a bit on a horizontal branch and then ensconced itself among some leaves.  As we approached the site, we observed the female higher up in the tree.  She then climbed down and started feeding on a wildebeest carcass which had been jammed into the base of the tree.  Eventually both mother and daughter climbed back up into the tree, where we left them. 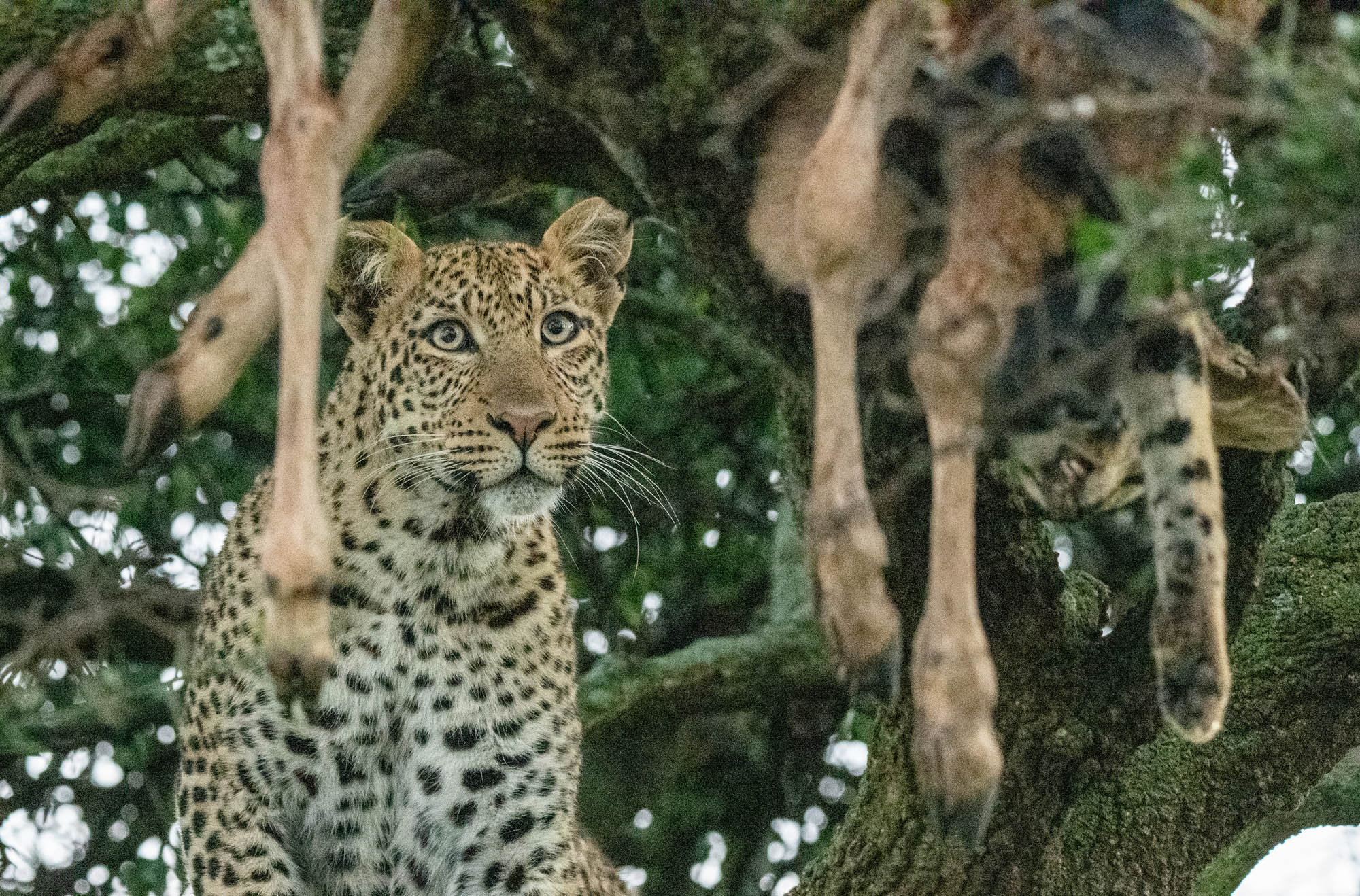 The very next sighting was yet another leopard. This time a young male, which we soon realized was a veritable killing machine.  He had no less than three carcasses strung up in his tree:  two young wildebeest and most unexpectedly - a serval cat.  Leopards are known to kill and actually consume other cats.  When we first saw it, the serval carcass had not been mutilated or partially devoured, and we speculated about the likelihood of the leopard actually consuming it, given the abundance of other options. 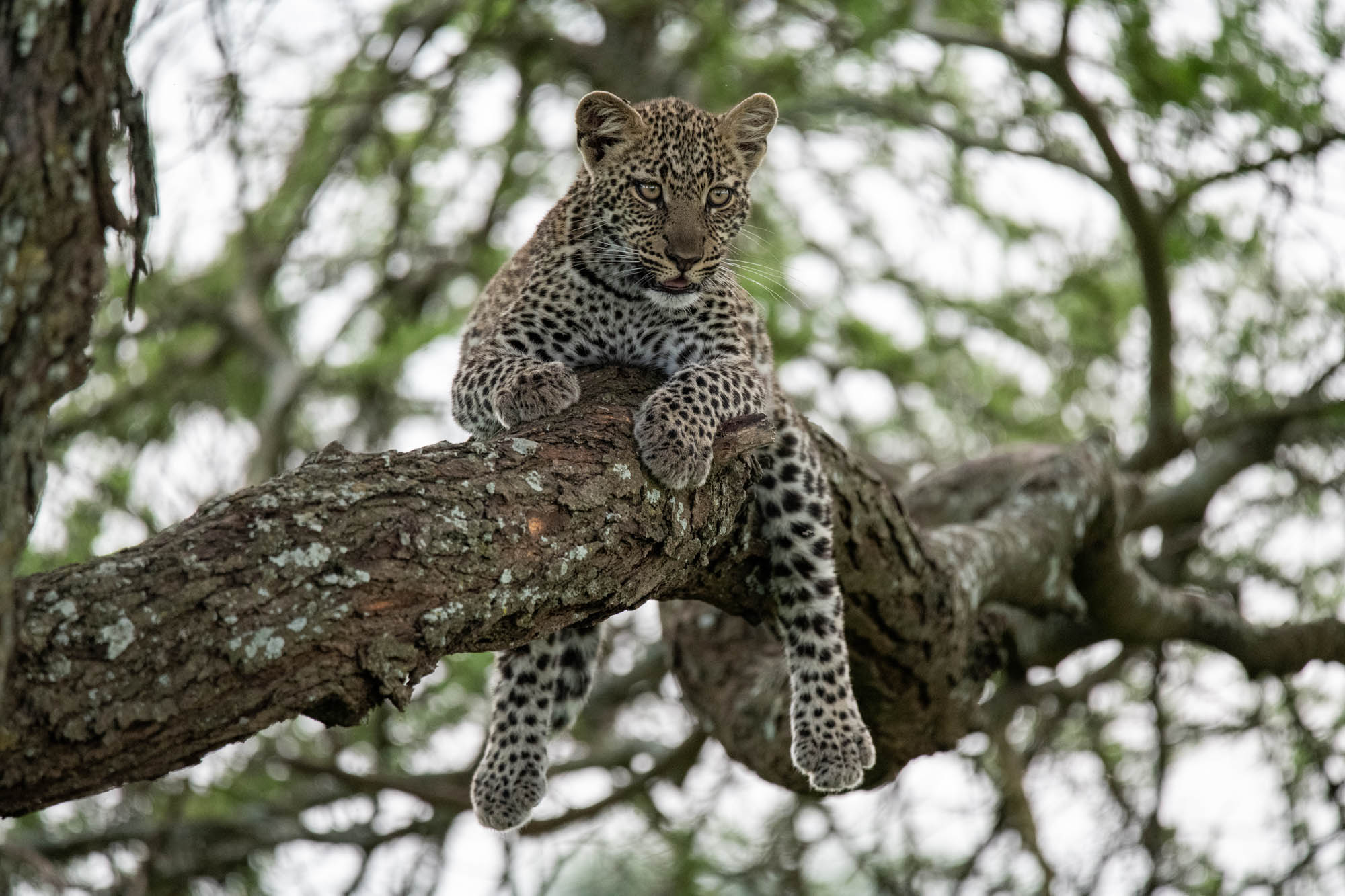 The light was fading fast so we had to return to camp for dinner.  Predictably excellent.  A soup starter, a choice of Spanish lamb stew with couscous, or herb-roasted chicken, and a vegetarian option.  Plus a pear tart for dessert.  The lions may have roared outside my tent again on this night, but I was dead to the world. 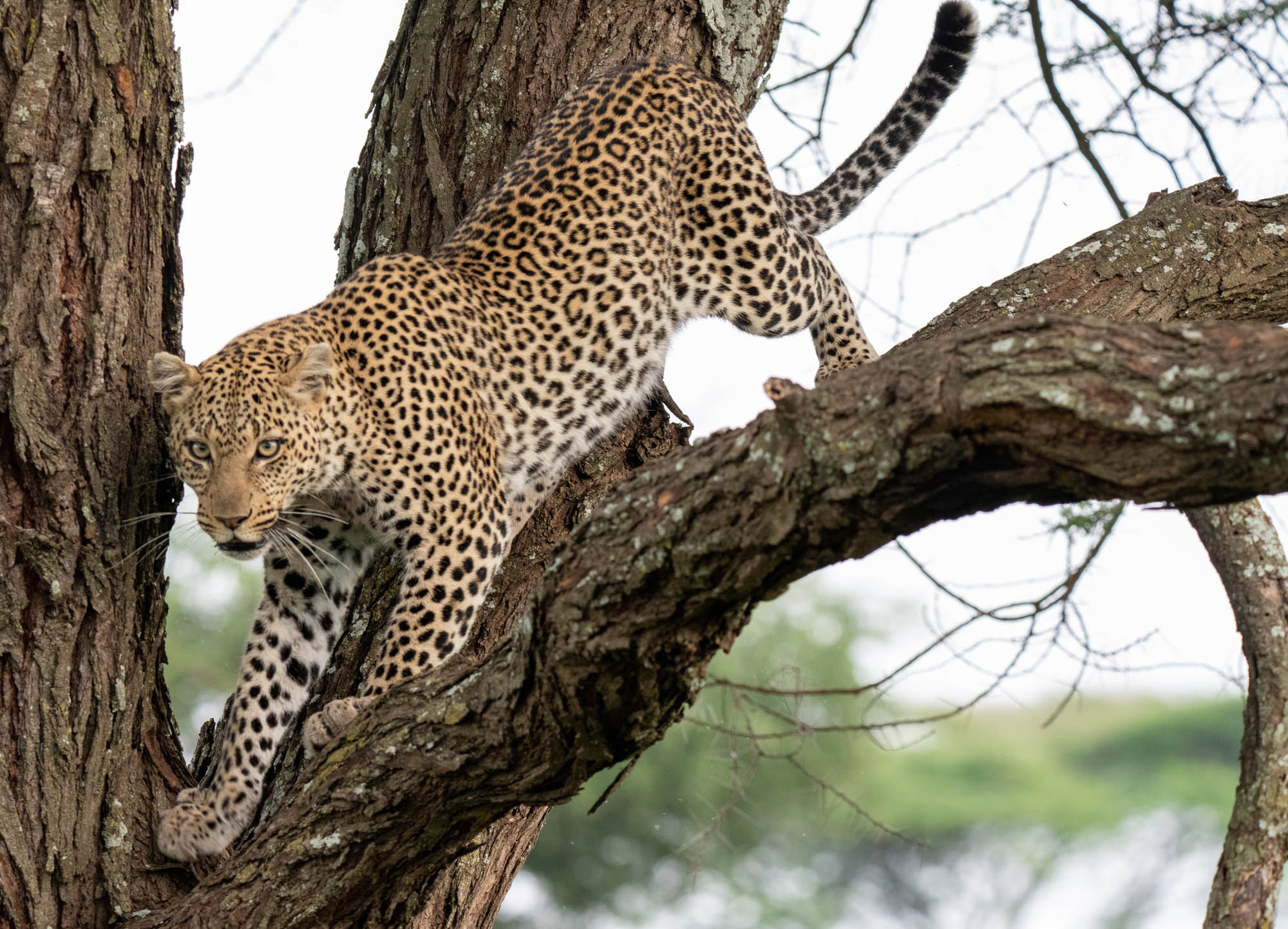 The following morning we were out early, hoping to get some better photos of the leopard which had killed the serval.  Despite the lighting conditions remaining sub-par (cloudy), I did manage several decent captures of this beautiful cat.  Initially as he was waking up - he had spent the night in a low bush about 20 meters from ‘his’ tree - and then as he approached and clambered up the tree. 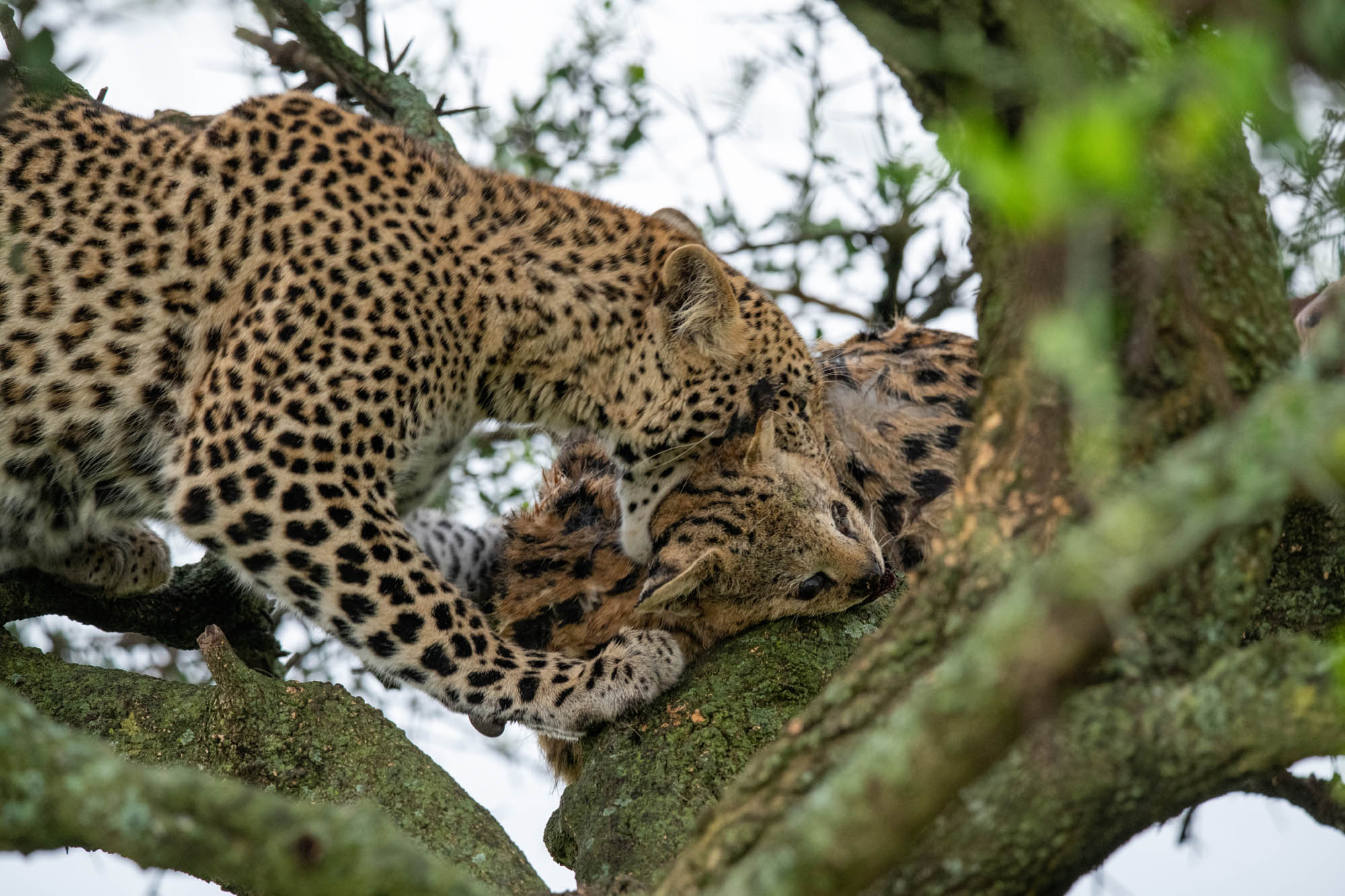 Over the next hour or so, the leopard relocated the dead serval more than once, eventually piling it on top of one of the wildebeest.  The young male then rested up a bit, seemingly content to just stare at his handiwork.  After taking a few bites from the serval, which he did not seem to find very palatable and whose fur clearly was not to his taste, the leopard turned to the wildebeest for sustenance, feeding on it for about 15 minutes or so.  Then it was leopard nap-time and we went off in pursuit of other things. 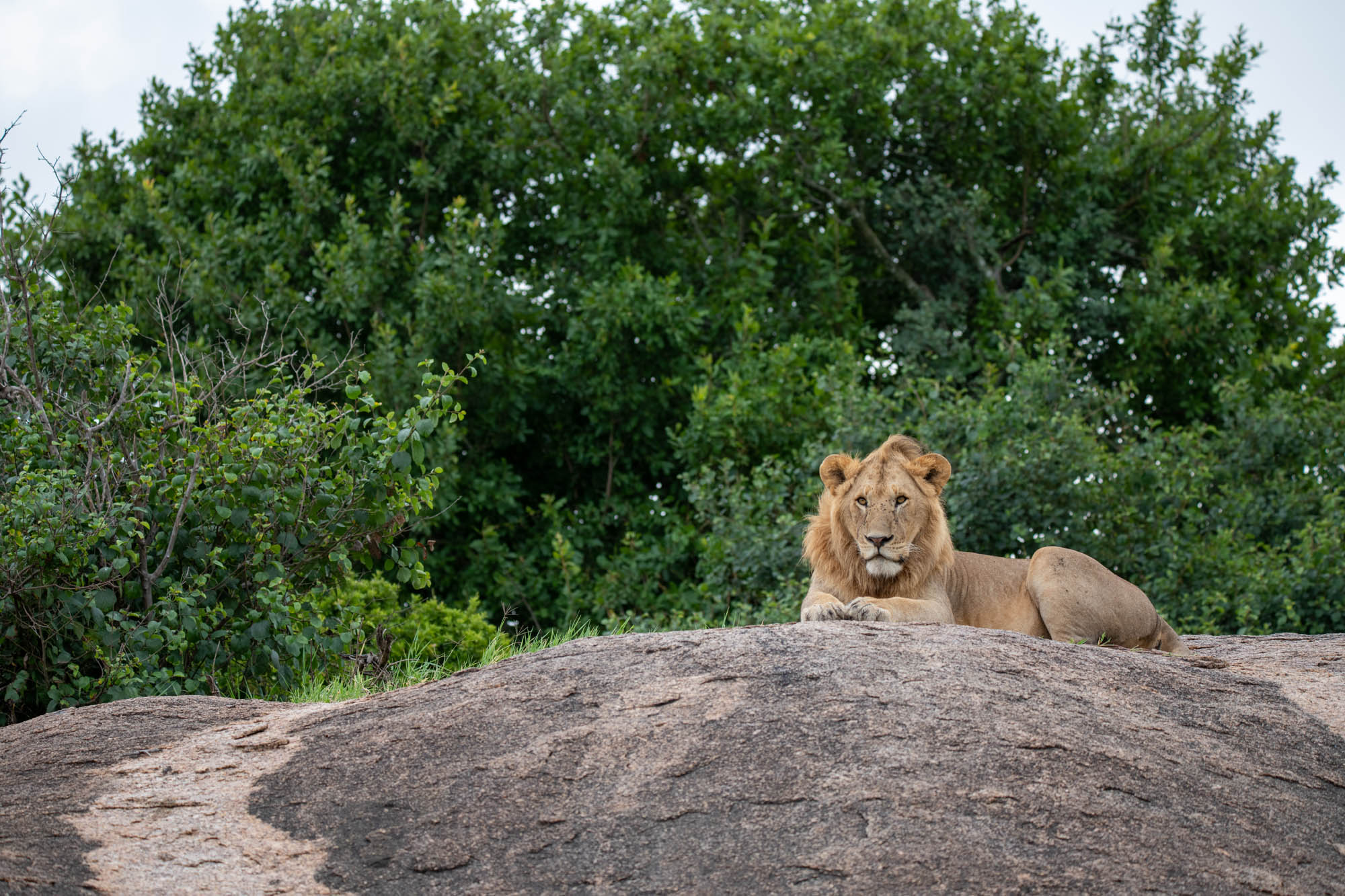 The other things turned out to be more of the same, when we relocated the three young lion boys from the previous day.  The difference being that they were on top of a big rock this time around.  Having been told earlier that the area was known as ‘Simba rocks’, it all started to make sense.  An impending thunderstorm - which in fact caught up with us en route - prompted a return to camp for lunch. 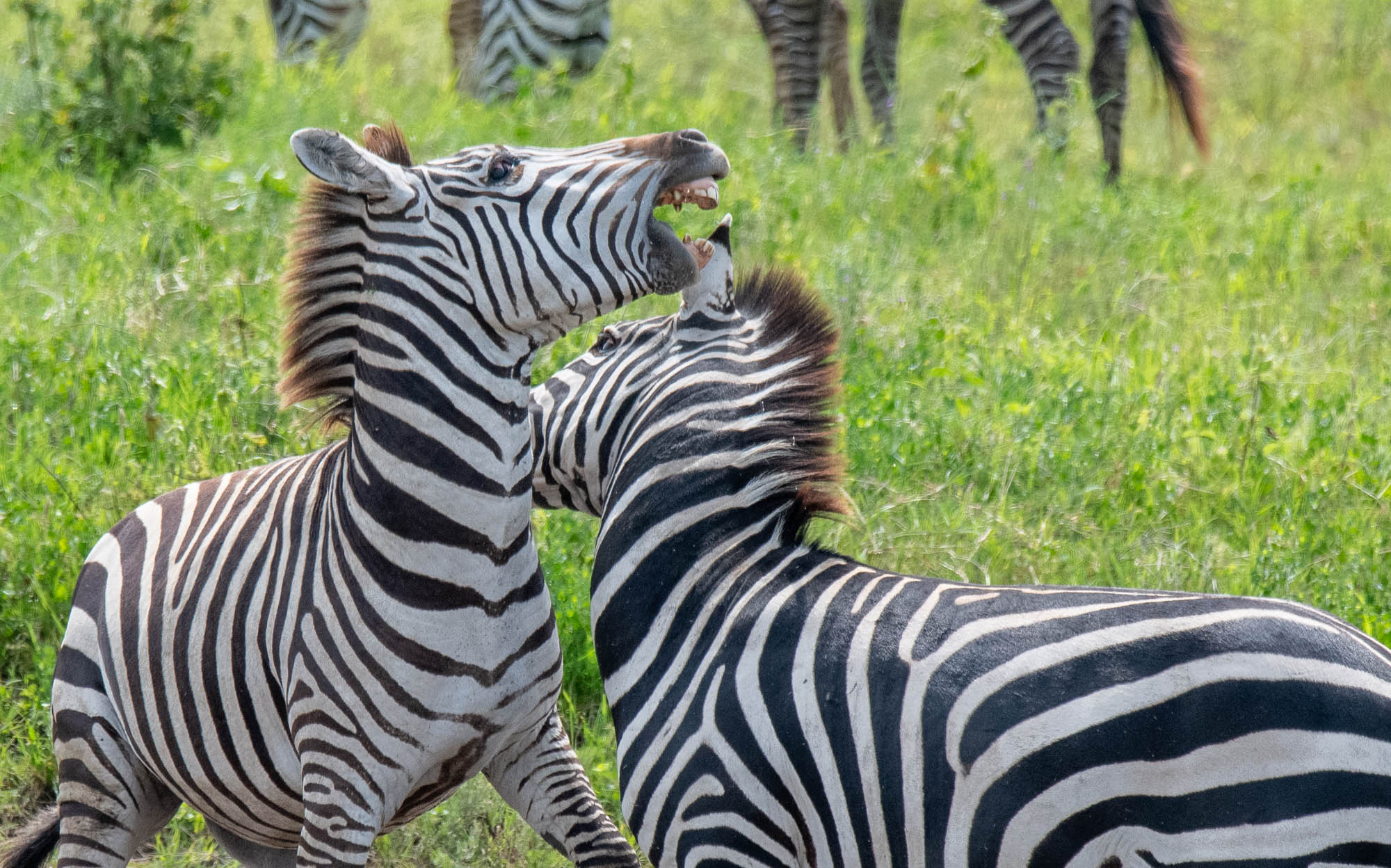 Once again an elegantly presented, tasty meal.  A summer salad.  Asian pork salad with rice noodles.  Marinated cucumber, beetroot and carrot salad.  And a passion fruit panna cotta to wrap it up.  Where are the exercise facilities when you really need them… 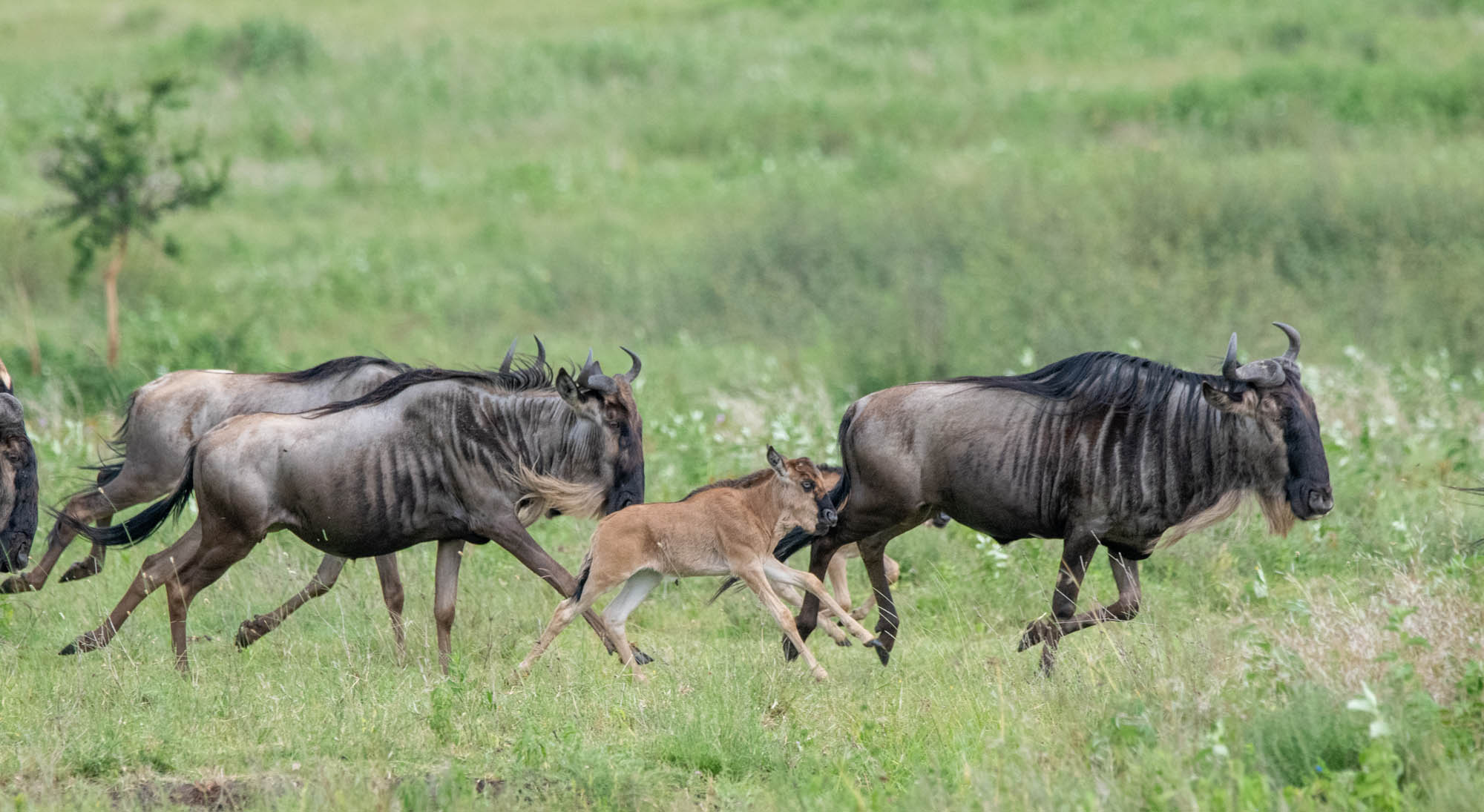 Sanctuary Kusini Camp turned out to be an ideal spot to spend a few days during the wildebeest migration season.  Certainly seeing thousands of these animals congregated in one area is an amazing experience.  This time, I started noticing the surprisingly high number of lost or abandoned baby wildebeest, many of which could be seen wandering about on their own. Lost in a vast wilderness, calling out for their mothers. 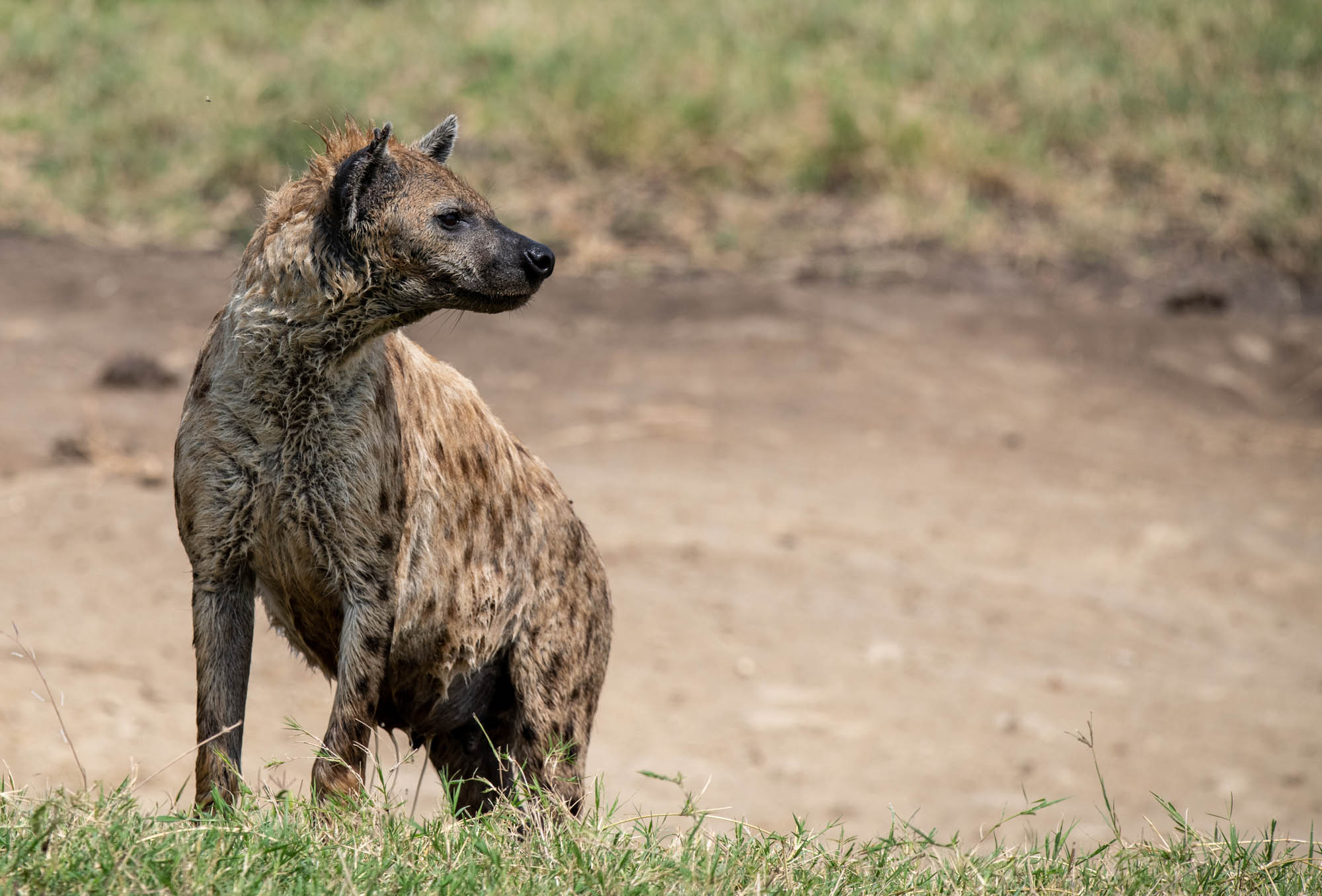 Silently, we all hoped that they would be reunited, as otherwise the outcome is grim.   In just a couple of days in the Kusini area, we must have witnessed a dozen or more incidents of young wildebeest being devoured by a range of animals and birds, from lions to leopards to hyenas, vultures, marabou storks, tawny eagles and jackals.  It is an inexorable part of the cycle of life in the savannah:  the never-ending saga of predator and prey. 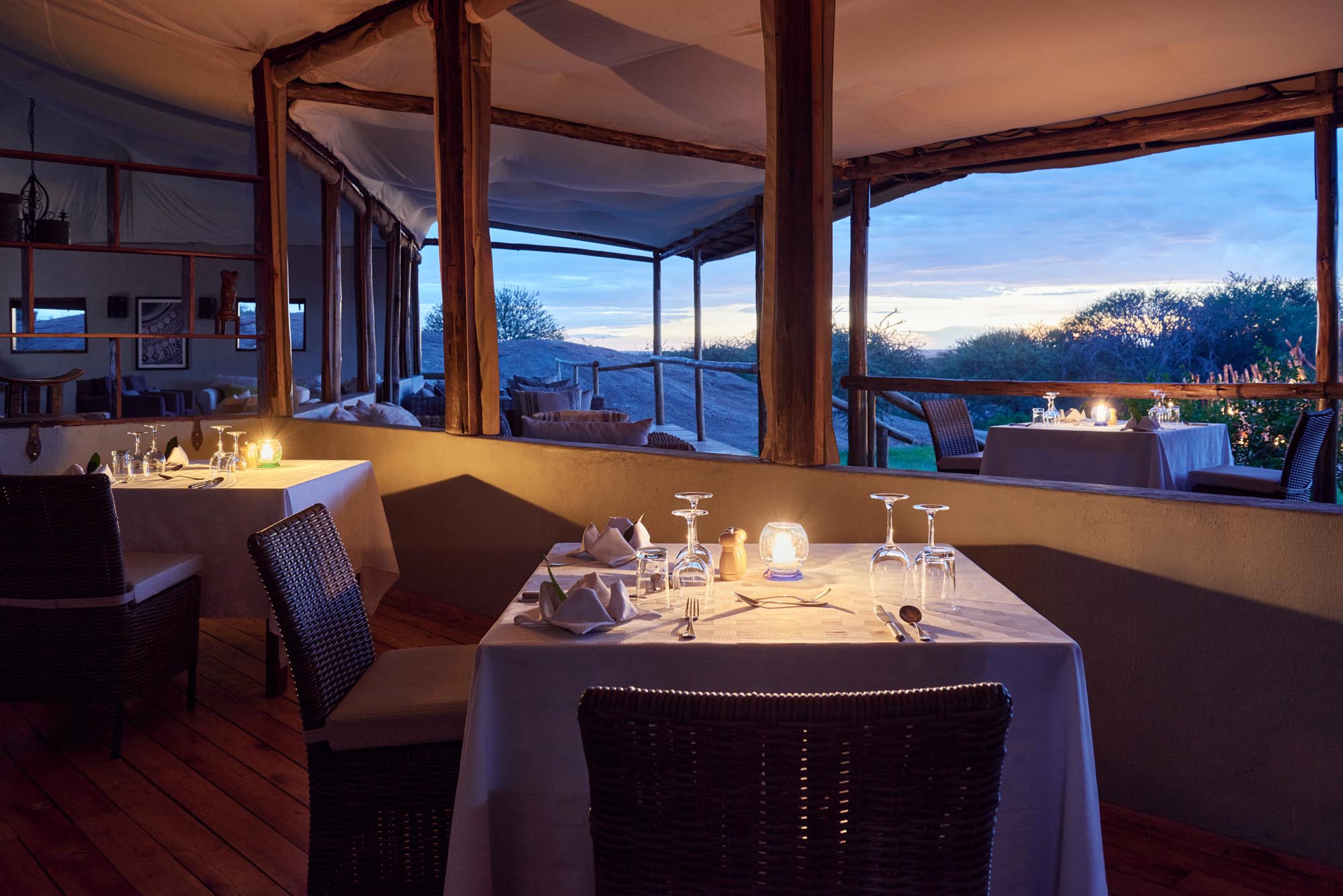 Kusini camp itself is located in a low-impact area at the base of a rocky outcrop, with 12 well-spaced tented rooms providing comfortable accommodation.  The rooms are spacious with plenty of space to store your stuff and it has ample plug points.  My tent happened to have a large king size bed with a mosquito net; I found the mattress to be exceptionally firm which was not an issue as that is my personal preference.  It had a good-sized outside veranda with comfortable furnishings - ideal to sit and reflect for a moment, or catch up on your diary notes. 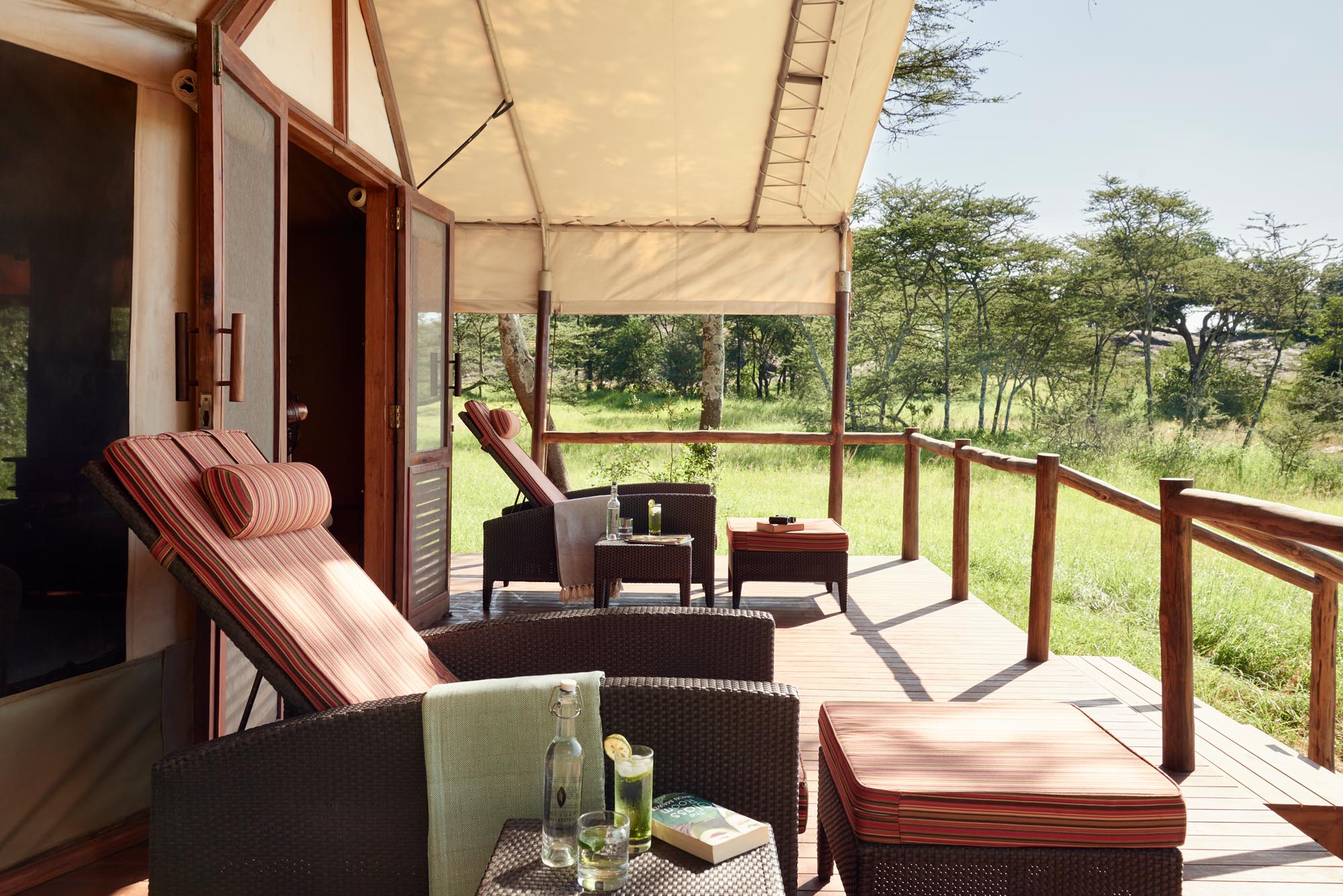 Overall I don’t think one can describe the camp as being particularly ‘luxurious’ but it is just right for the environment, fitting in well in this remote wilderness.  Sanctuary Kusini is clearly a quality operation, from top to bottom.  In terms of service, the level of hospitality, friendliness of the staff and management, it ranks up there with the best.  I just had the sense that everyone worked well together and that has a very positive impact on the guest experience. 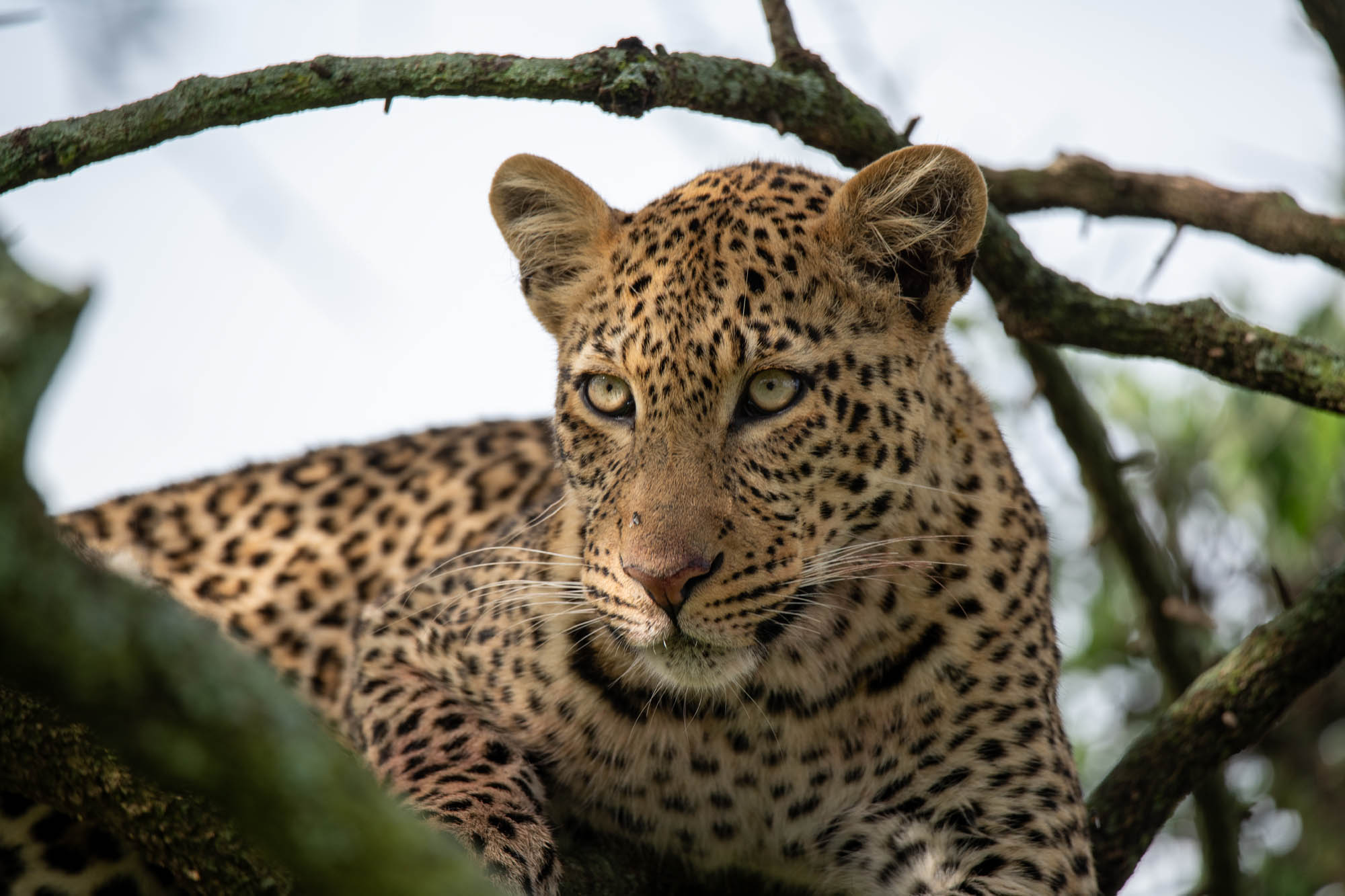 Another highlight was the feeling of having the entire area to oneself.  The only other vehicle we saw in the course of two days of criss-crossing the area, was one other vehicle - also from Kusini - and a vehicle operated by a private guide whose client was also staying at the camp.  It’s just you and your guide and thousands of animals - when the migration is around.  Even at other times the game-viewing is good as the big cats are resident.  Although we missed them - too busy watching leopards and lions - Kusini is known for its consistently reliable cheetah sightings. 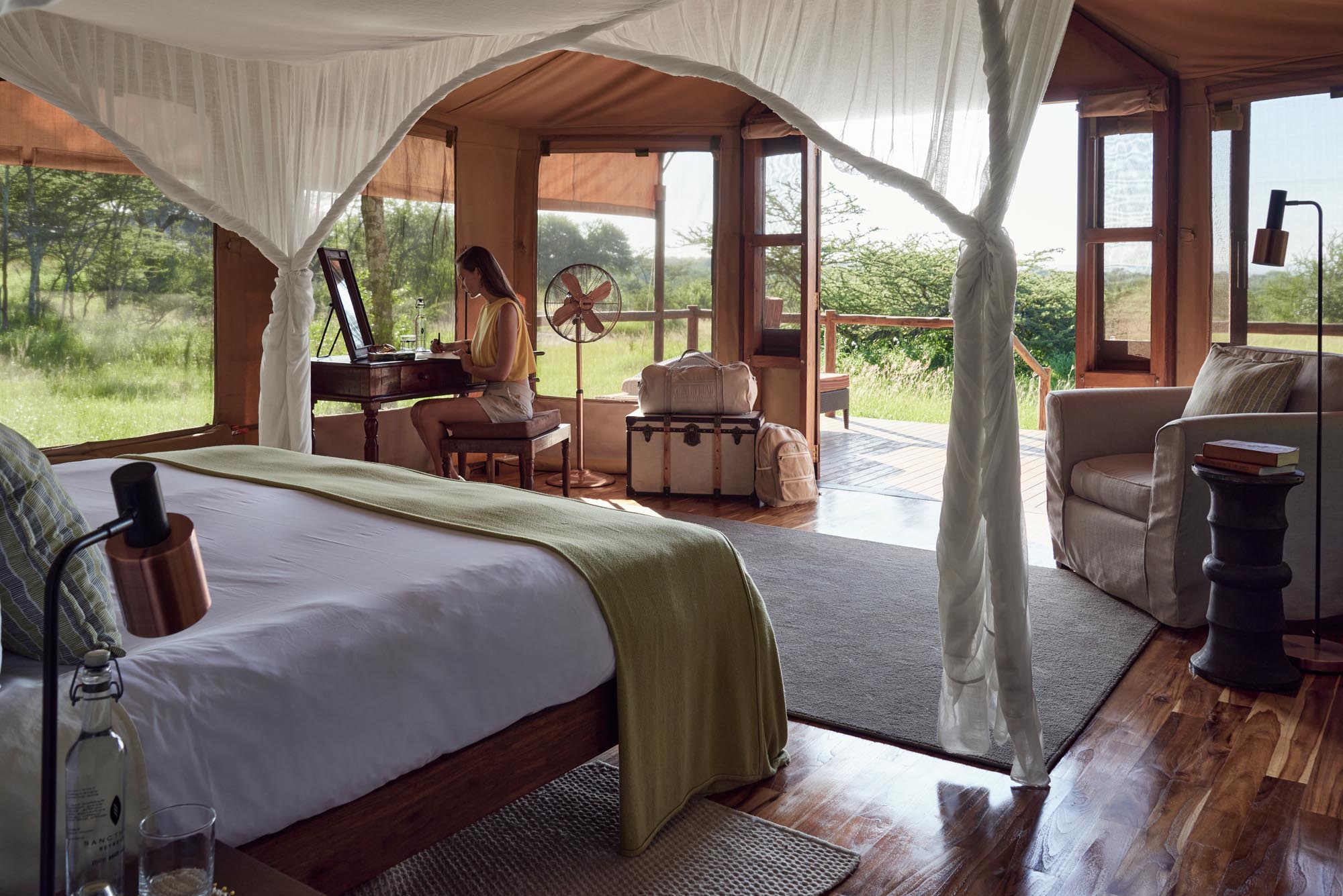 I’ve mentioned the excellent food before and the final dinner at Kusini was a case in point.  Simply outstanding:  a tomato and lemongrass soup, a superbly done roast chicken with a special sauce, freshly sauteed vegetable and a sweet lemony dessert.  This is one lodge where even the most discerning diners will be thrilled with the quality of the cuisine. 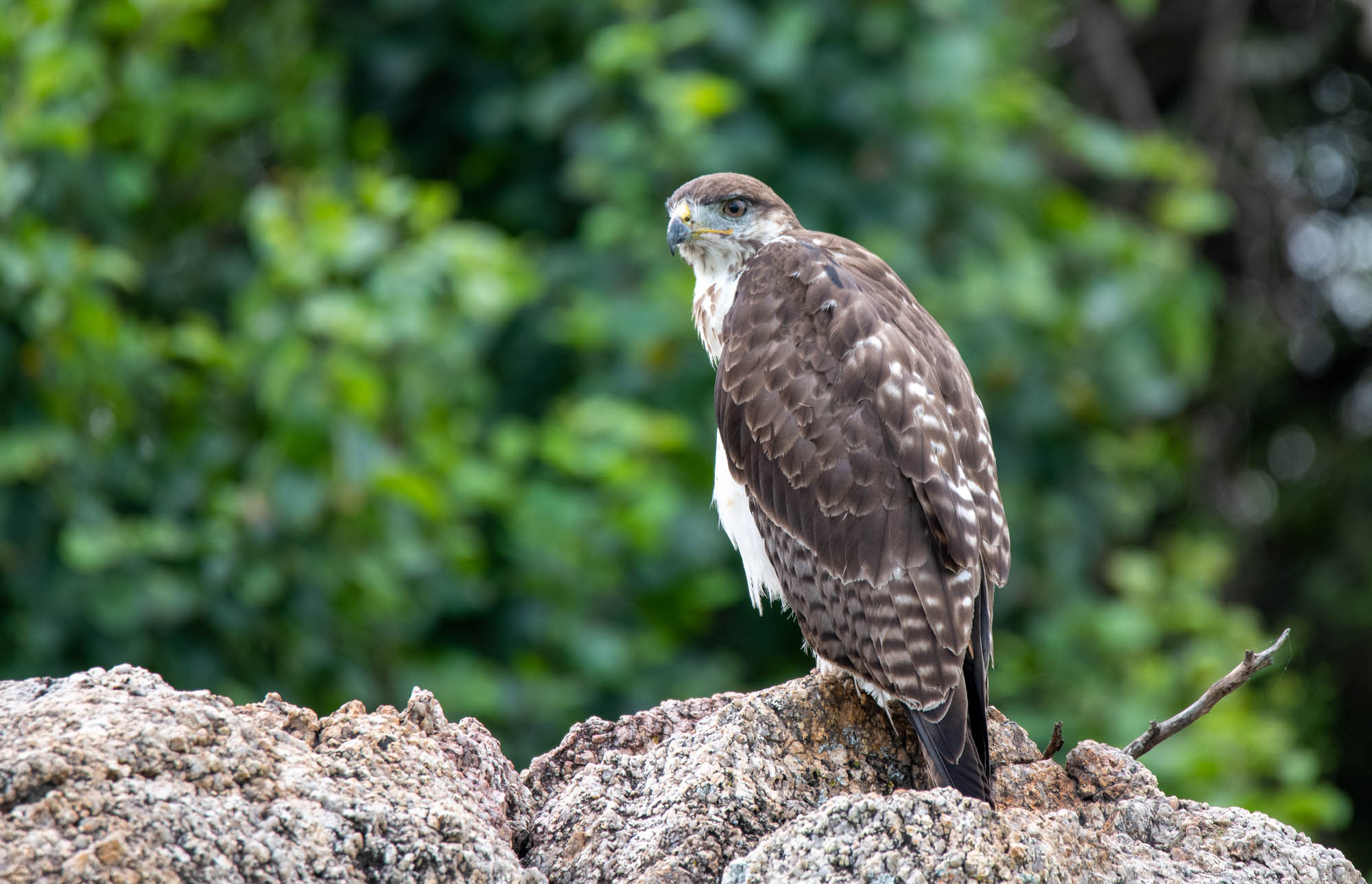 I cannot say enough good things about my guide Emmanuel Mbramba.  We bonded almost immediately when we found out that we had both been up and down Kilimanjaro a few times.  Me as a climber, Emmanuel as a porter and later a guide, as I recall.  Emmanuel was enthusiastic, knowledgeable and passionate about the bush and all the animals and birds.  He did a superb job setting me up for photographs, had tons of patience and just the right touch in terms of knowing when to approach and when to hold off, so as not to alarm any of the animals.  You would be lucky to have Emmanuel as your guide at Sanctuary, although I am sure that the other members of the guiding team have their strengths too.

The next morning, just after breakfast, I was back in the vehicle for the ride to the airstrip, this time for a flight to Seronera in the central part of the Serengeti. 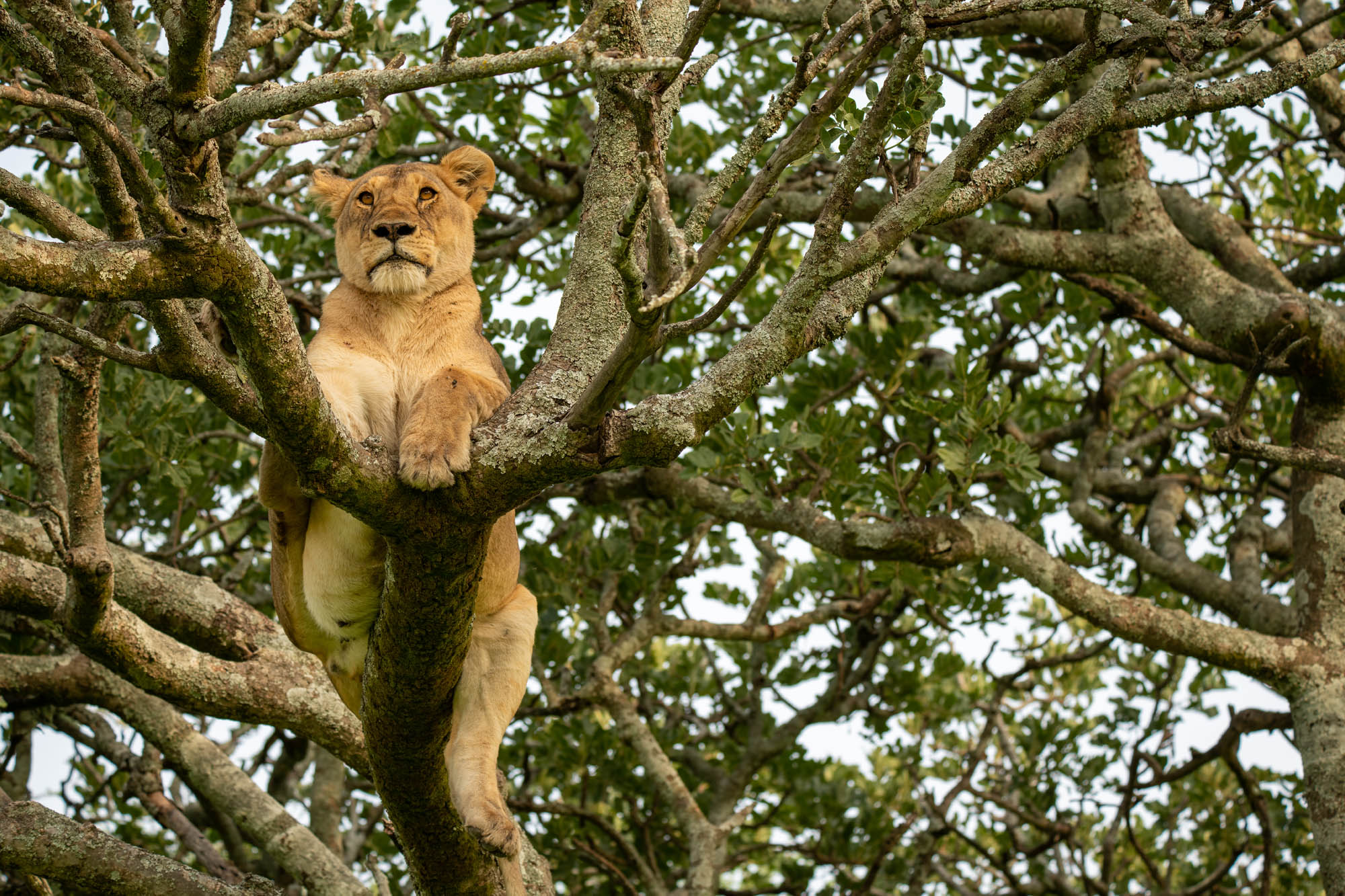 In our blog next week we discover another excellent big cat destination in the central part of the Serengeti, at Namiri Plains camp.  No less than 30 lions one morning, as well as cheetahs and servals.  It doesn’t get any better than that.