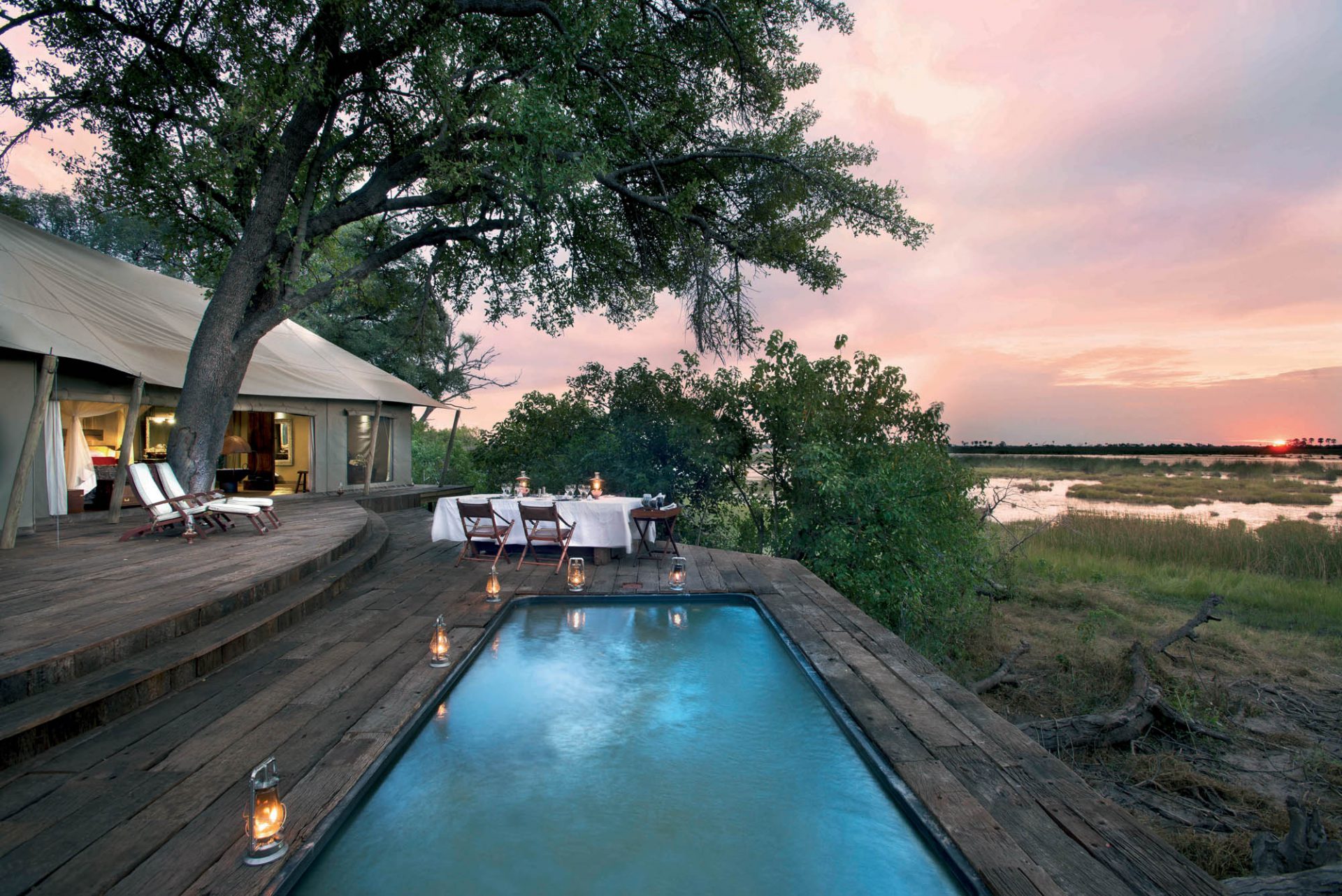 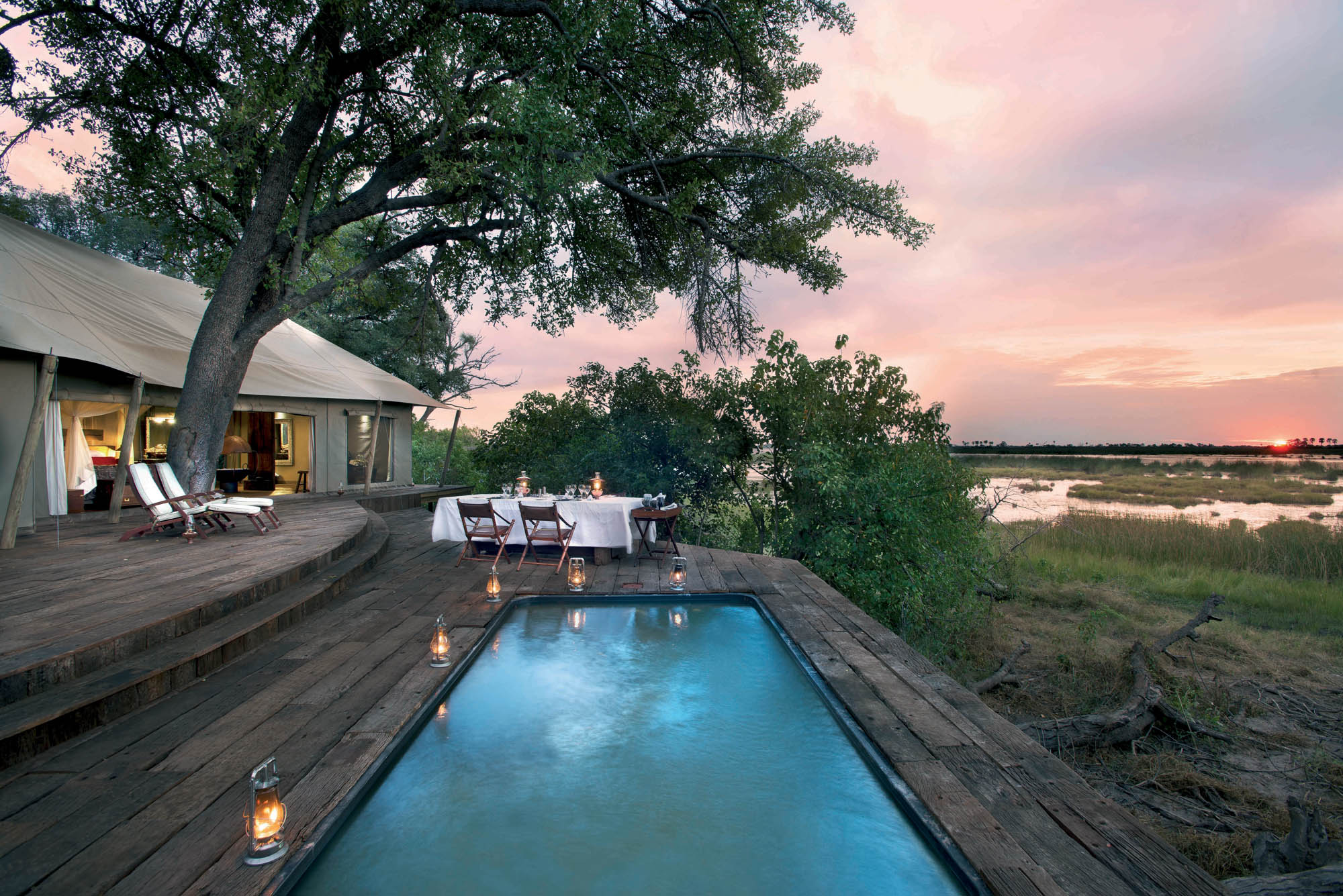 I experienced the magic of Zarafa some years ago when I traveled to Zarafa by boat from Selinda. It was an interesting and sometimes  adventurous journey.  The skipper on the typical aluminum skiff (seemingly in use everywhere in Northern Botswana) had his hands full finding his way through some thick reed patches.  Every now and then he’d run into a dead end or an impenetrable patch, and we’d have to divert.  Without too much of a delay, though, we made it there and it was definitely worth the trip. 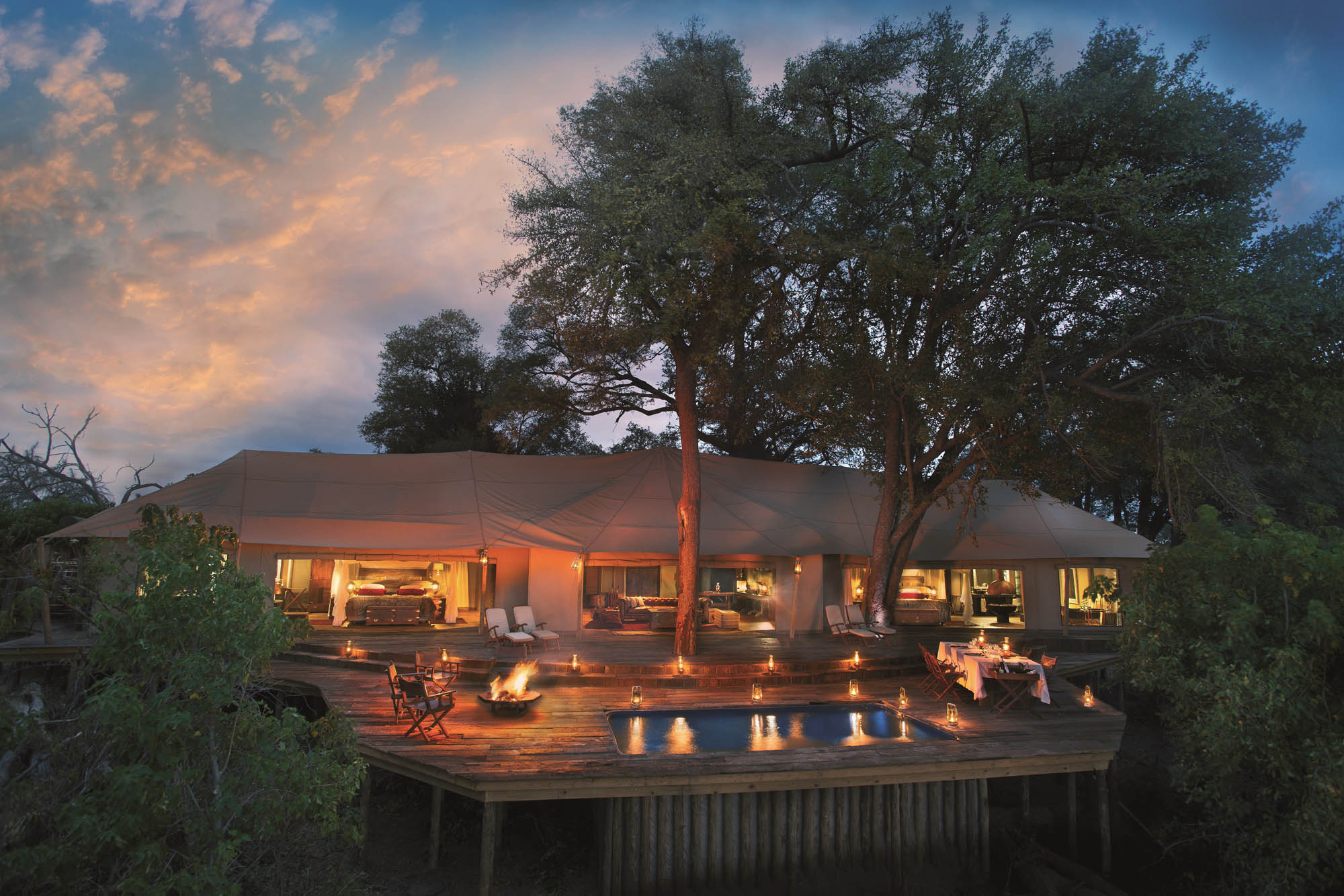 Zarafa has very impressive, massive rooms, essentially three tents stitched together, resting on a raised reclaimed railway sleeper deck.  The camp has an old-fashioned 1920’s safari feel complete with safari equipment such as a professional quality Canon camera and premium binoculars in a foot locker. It epitomizes the romantic Botswana safari touch, much sought after by so many visitors to the area. 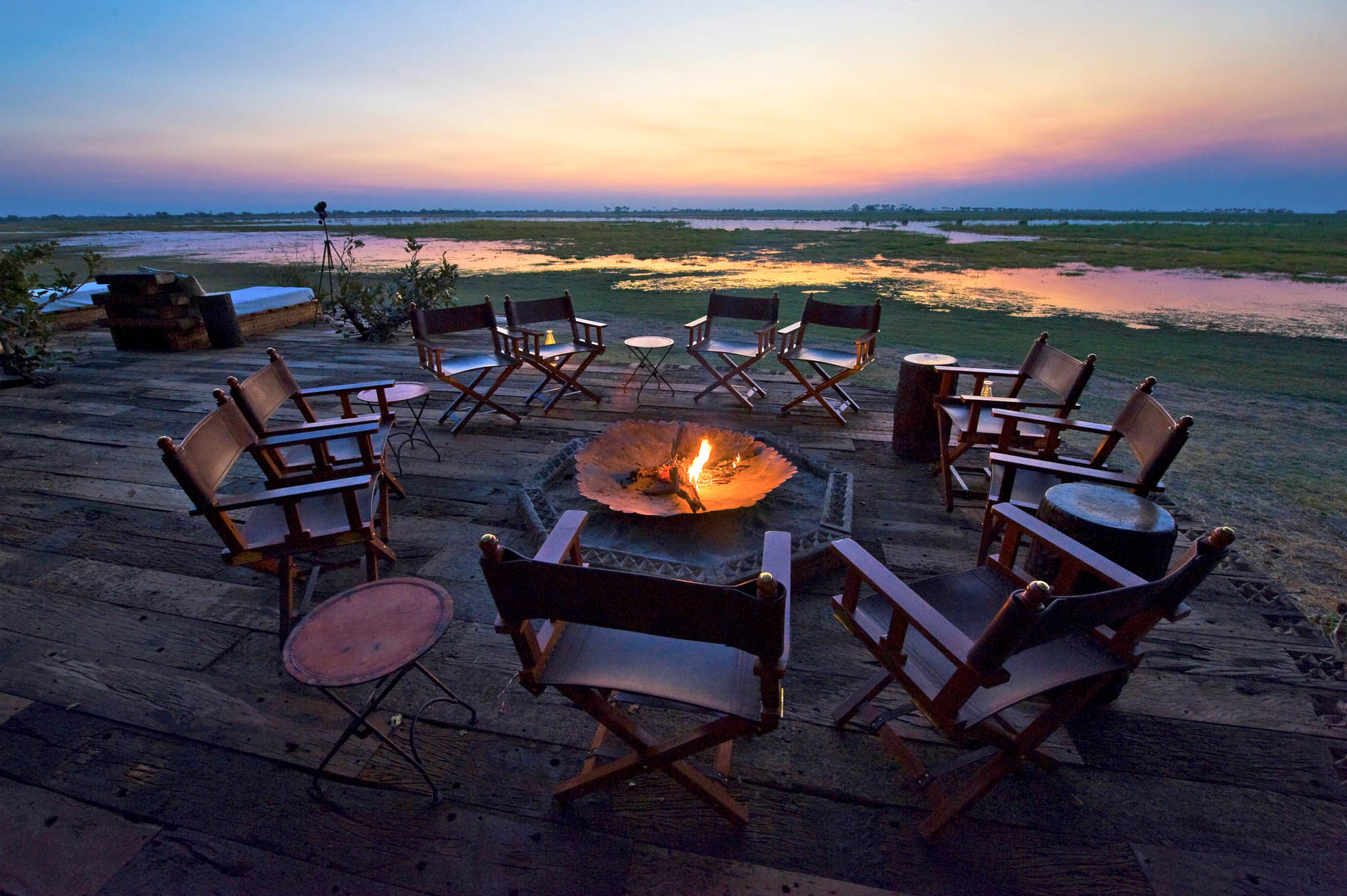 Being a runner, I was thrilled to see - and utilize - the outdoor gym with its treadmill which looks out over the floodplain.  On safari, exercise options are scarce so I was really happy to be able to fit in a couple of 5k runs, during my stay.   Beyond that, the main camp area has  a sizable main lounge, a library, dining area and bush boutique.  Despite its luxury appointments, Zarafa Camp maintains the perfect balance between luxury and adventure.  In line with Great Plains Conservation’s  ethos and practice at all their camps, Zarafa has sterling environmental credentials.  The camp’s construction consists of recycled hardwoods and canvas. All the camp’s electricity comes from its solar farm, and a biogas system converts vegetable waste into usable cooking gas. 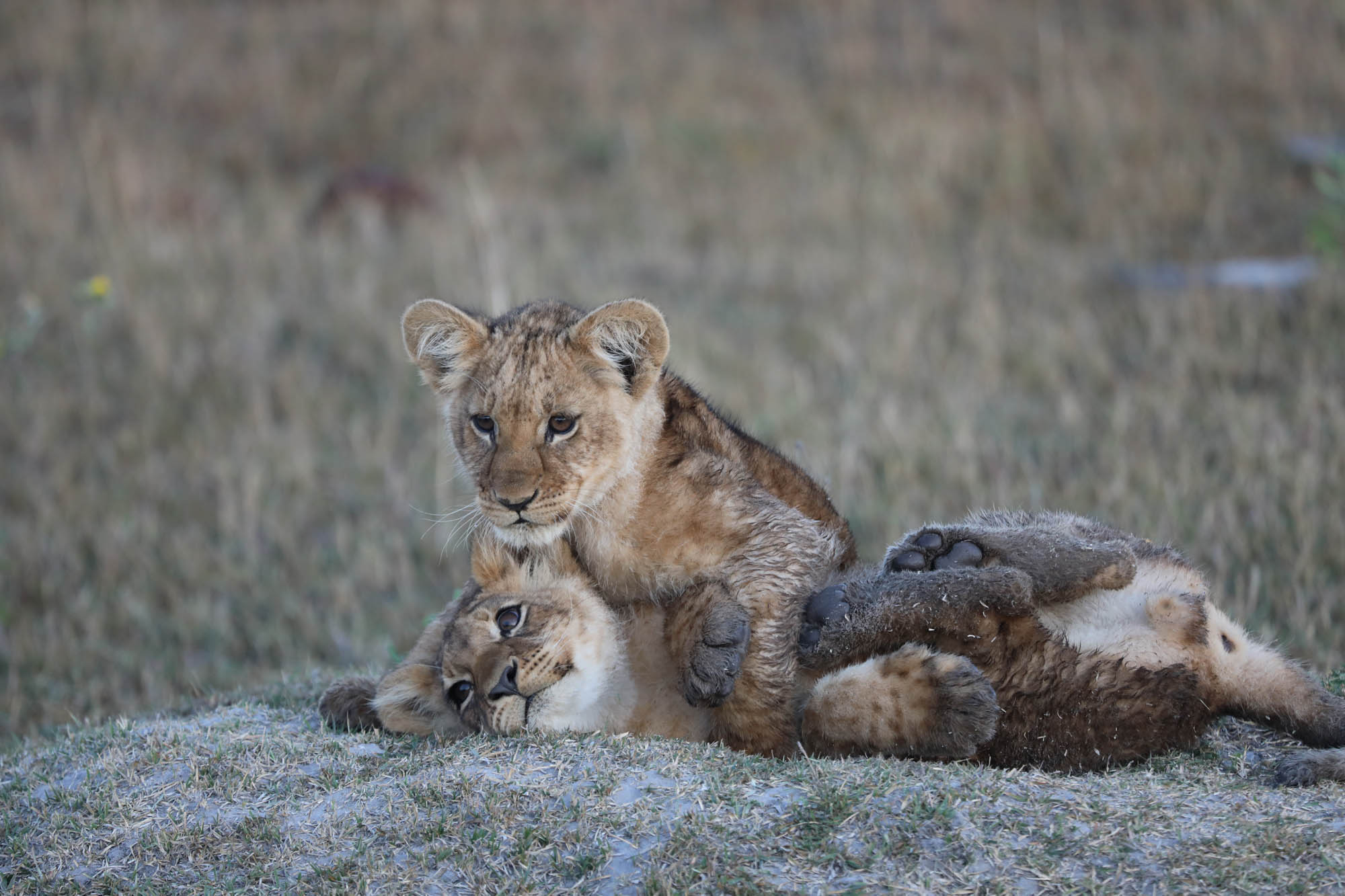 On their more recent visit this summer, Fish Eagle Safaris’ Lyndon and Christine arrived in more typical fashion:  on a light air transfer from Great Plains’ Duba Plains camp, with a quick stop to pick up some guests at Khwai.  All in all the trip took a little less than an hour.  On arrival they were met by their guide Joseph who drove them the short distance to the camp. 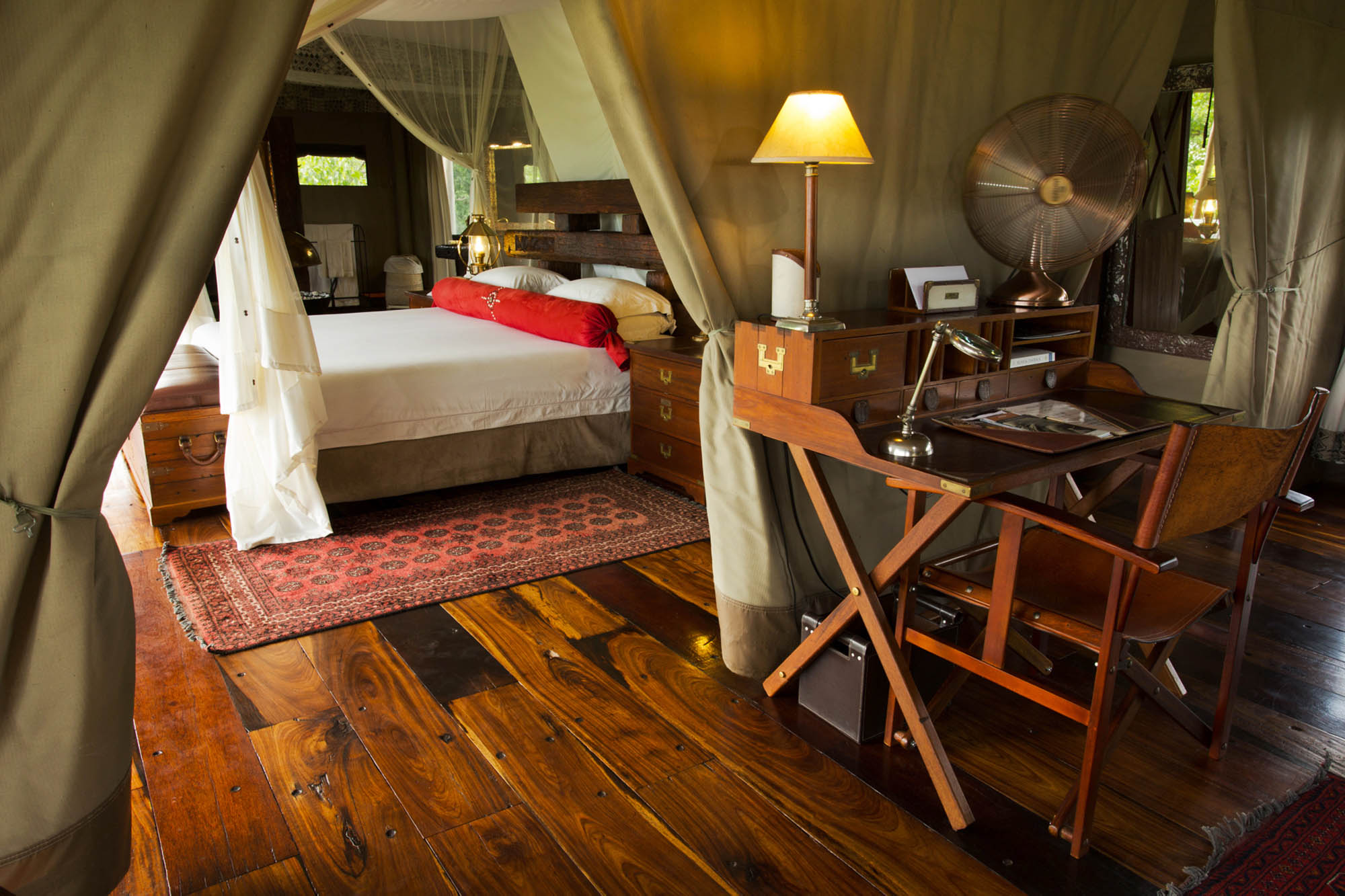 Here are Lyndon’s impressions of the property:  “Zarafa has an elegant presence overlooking the Selinda Spillway.  The rooms are luxuriously  appointed.  I really liked their open and bright layout with the sunlight filling the room. 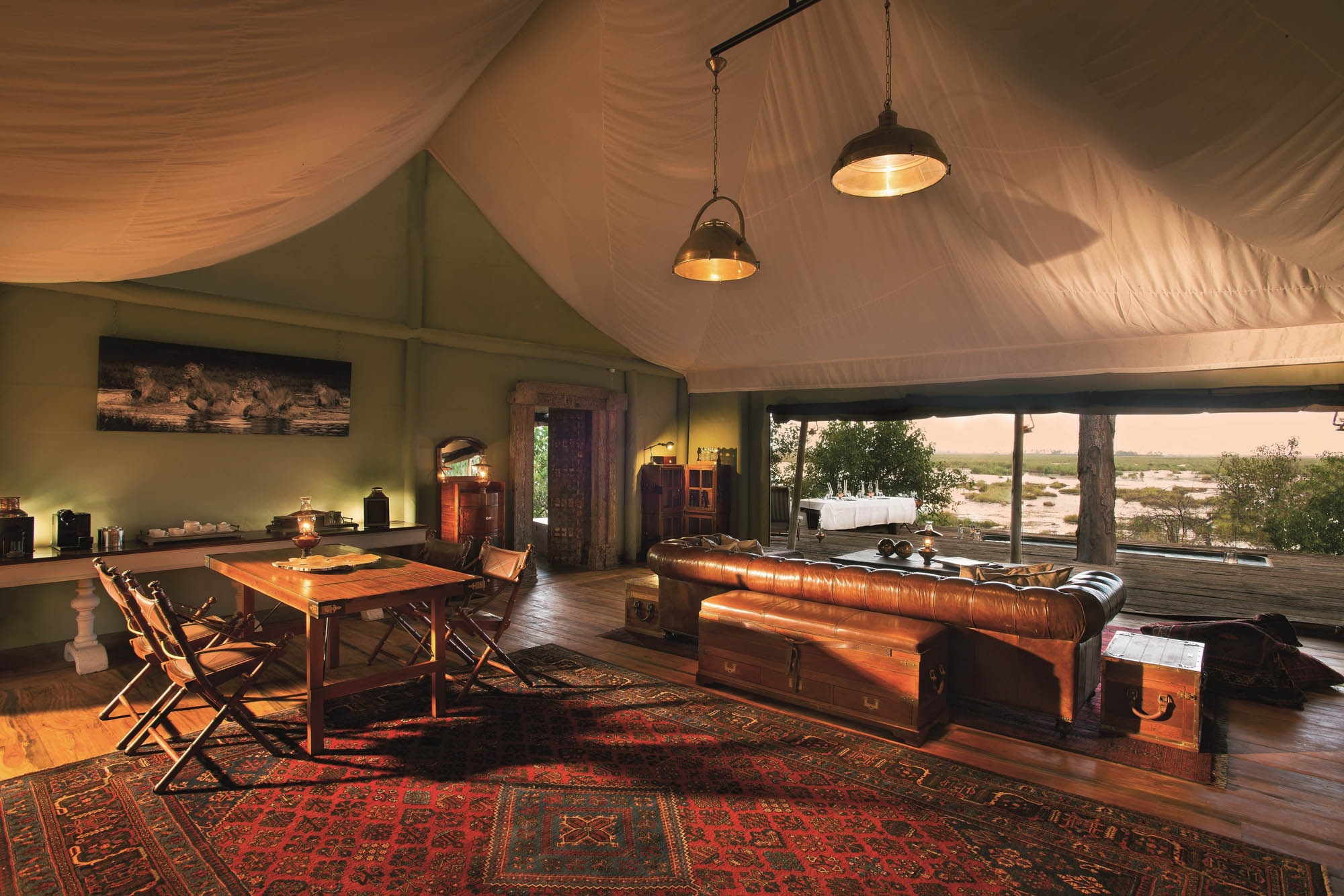 At the entrance of the rooms are those large wooden doors you might see around Zanzibar.  In the first section of the lounge there’s a leather couch and chairs, mini-bar and tea station, a trunk with among other things some yoga mats and a set of binoculars for the room.  There is also a charging station and a desk and chair which comes in handy for the occasional journal entry.  Outside the tent?  A plunge pool and a couple of lounge chairs.  Through a partition is the other half of this splendid room.  A king size bed lies in the middle, the sink and shower a bit further in.  Between them is a novelty, a gas-powered flame room-heater.  Useful during the cold winter nights and mornings. 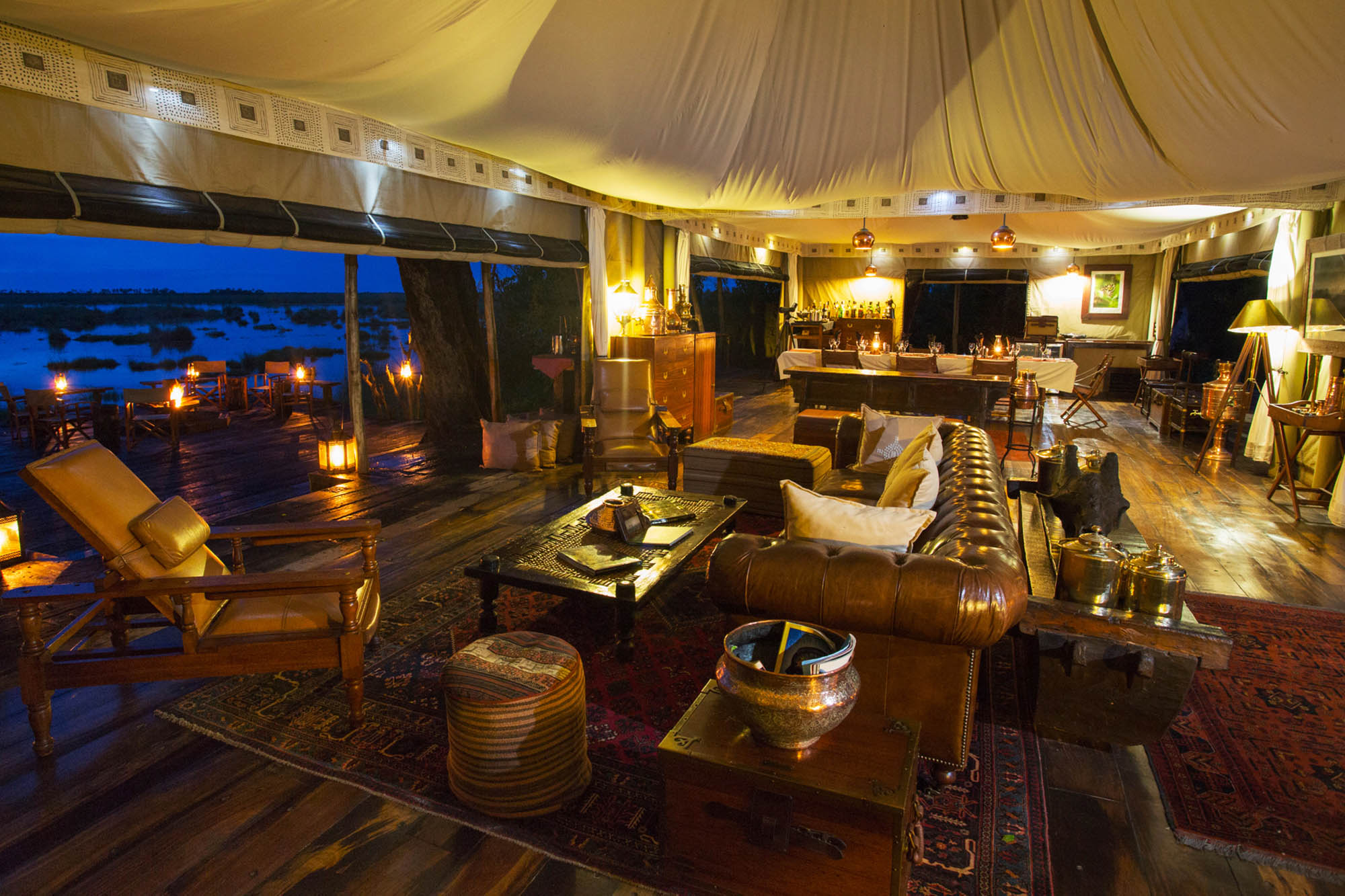 As we experienced at the other Botswana and Great Plains camps the hospitality is excellent.  The entire camp staff is so genuinely friendly and quick to assist in any way.  By the end of our stay we were sad to have to say our goodbyes to everyone. 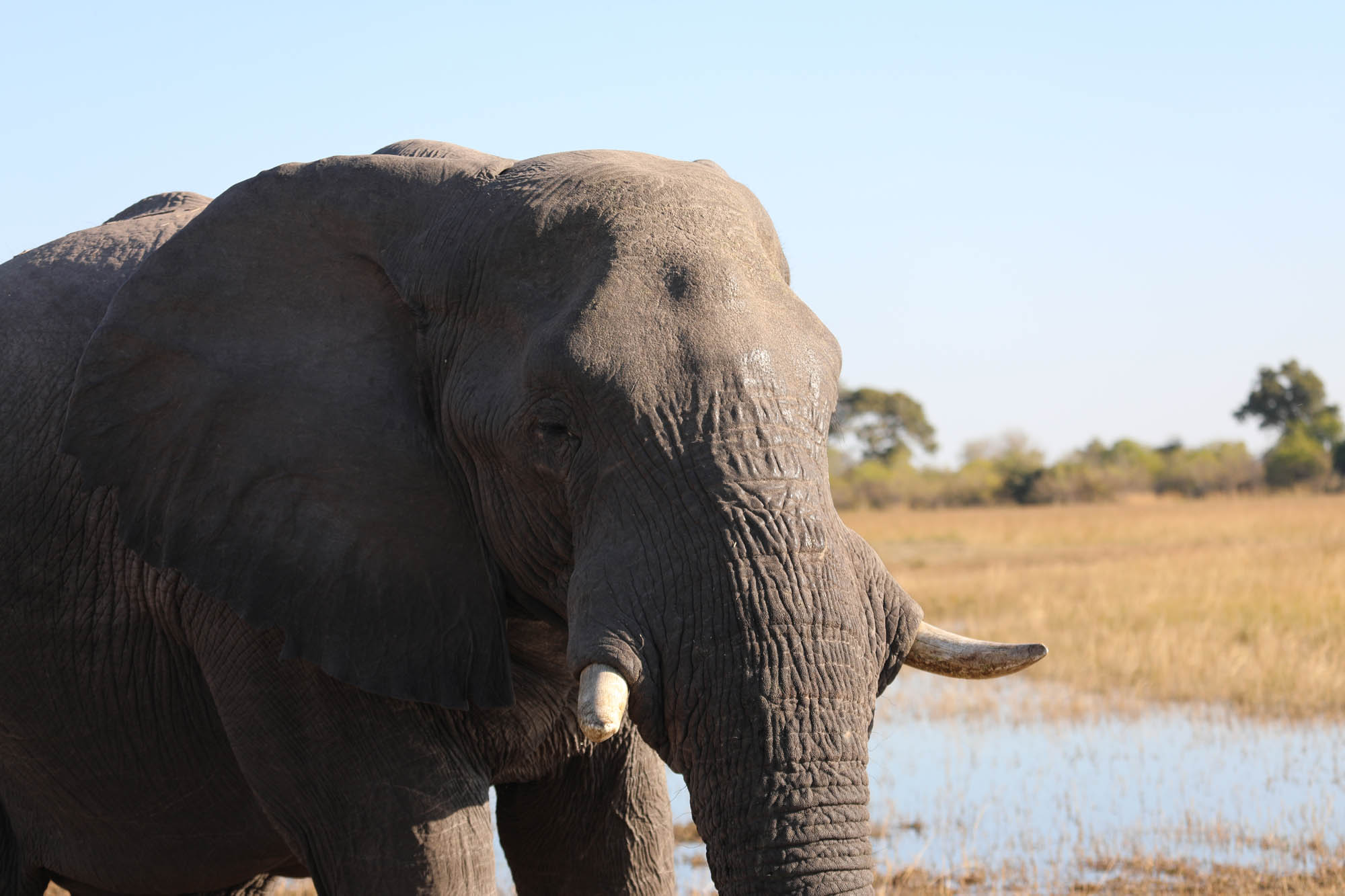 The concession where game drives are conducted is quite different than at Duba.  This area is not directly within the Delta although it is traversed by Delta water in the form of the Selinda spillway.  The concession has both large dry areas and large wet areas where the river forms sizable lagoons before continuing into various smaller channels.  Much of the general game is similar (to the Delta) with the area dominated by red lechwe and a healthy population of elephants. 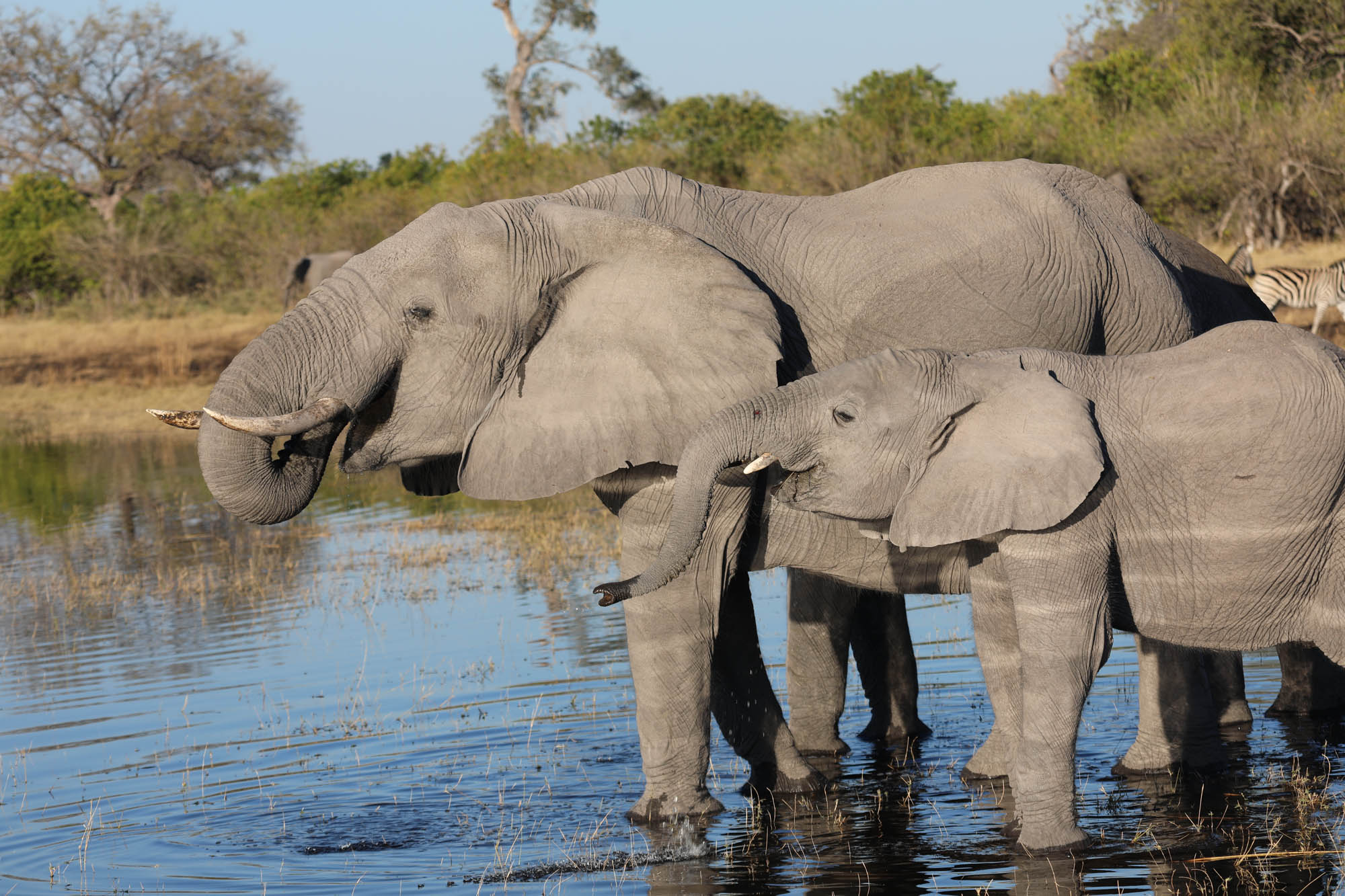 We were fortunate on our first game drive to arrive in front of a large body of water just as a family of elephants came in from the mopane forest for their evening drink.  They had some very young ones with them and while our presence was tolerated it was evident that the older females did not appreciate it.  No worries as long as the animals are not startled by sudden movement or loud noise.  Elephants, especially in large numbers, are endlessly entertaining and 15 minutes can turn into an hour in the blink of an elephant's eye, to get you lost in quiet observation. 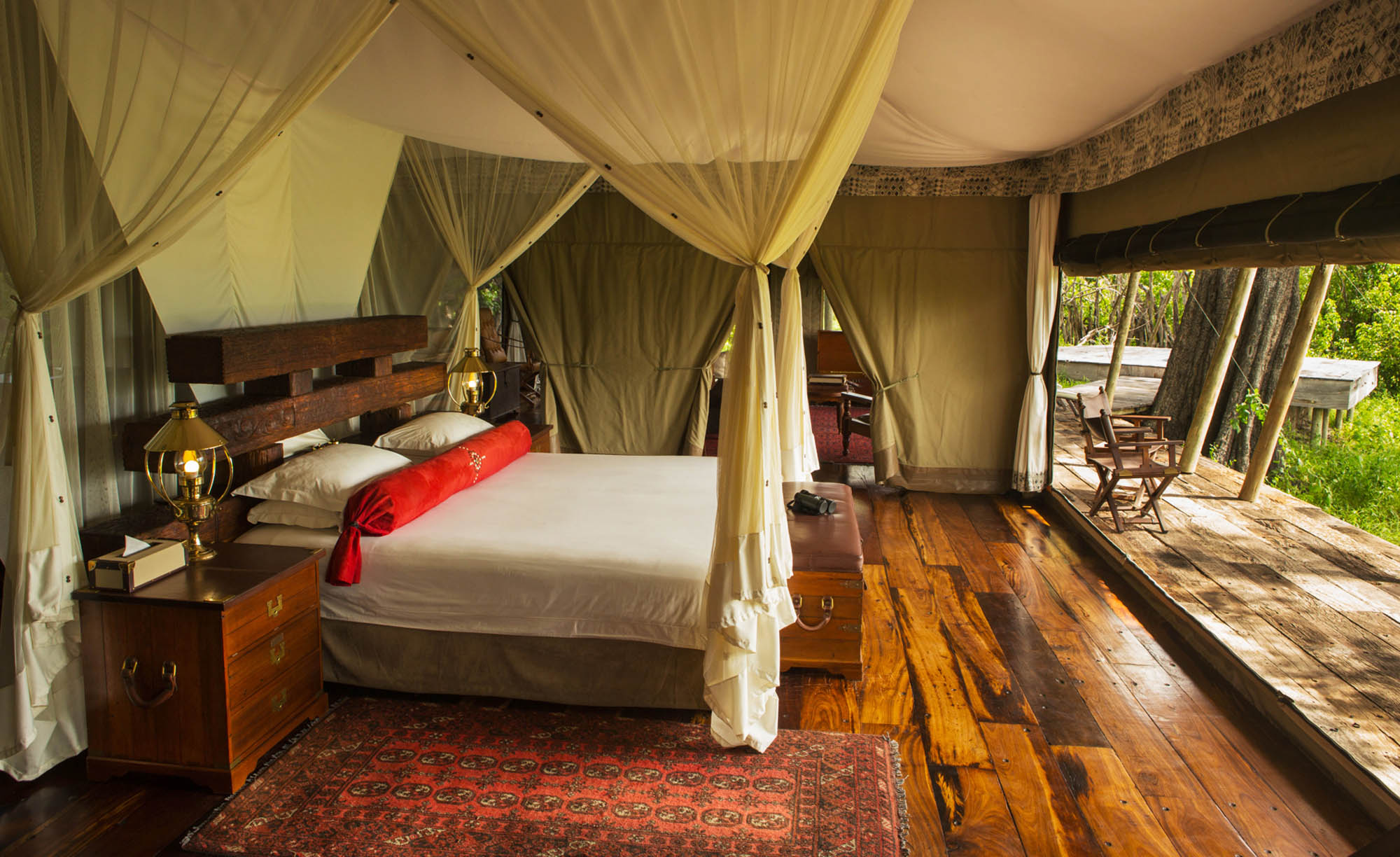 Zarafa’s meals were patterned along the same lines as Duba which meant we were served a delicious combination of four salads and one protein for brunch. Dinners were excellent.  On our first night I had a ‘melt in your mouth’ beef filet and the next night some very tender pork.  I can say with certainty that all the Great Plains properties served some of the finest if not the finest meals I have had while on safari. 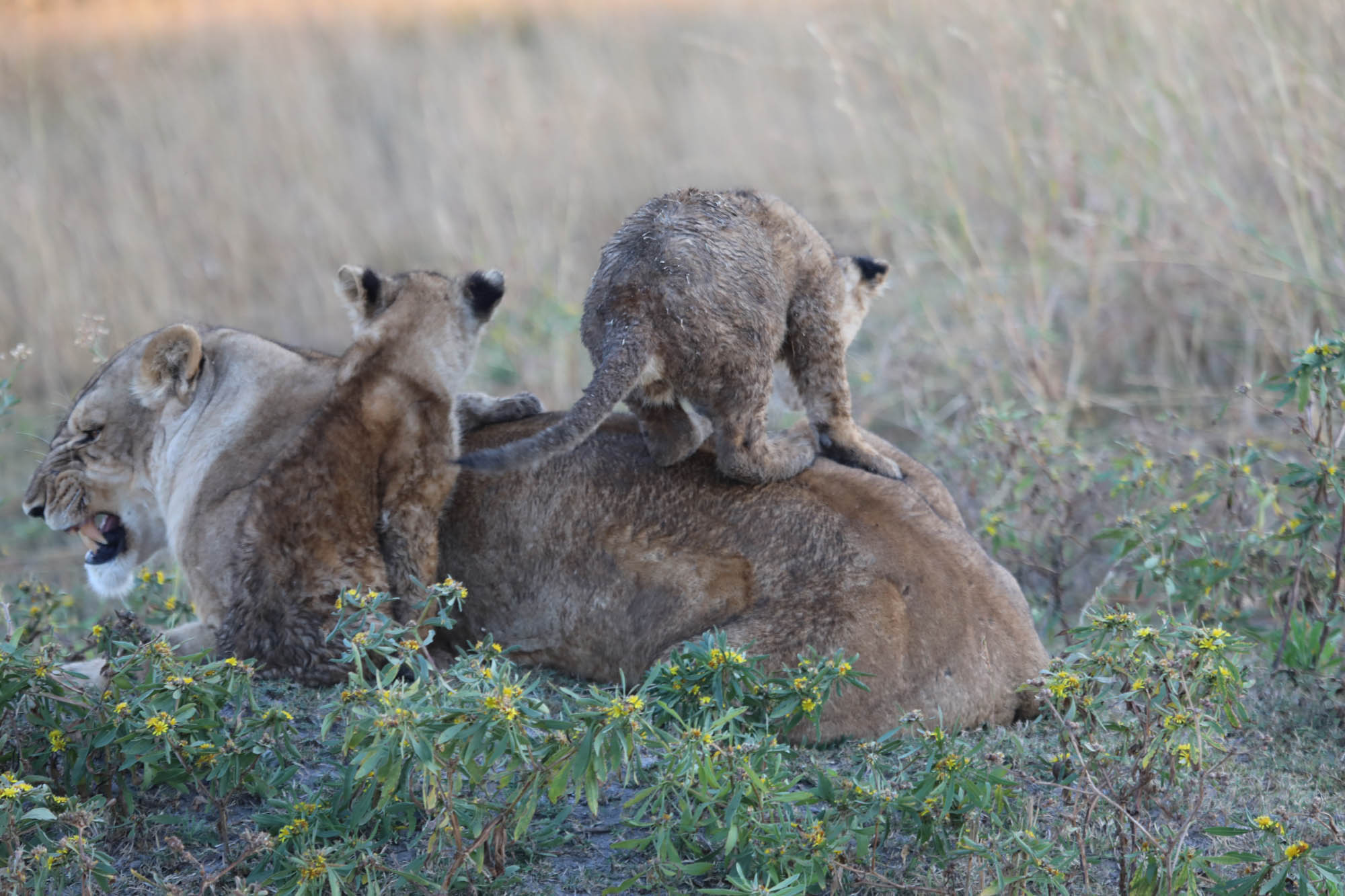 As a whole the game viewing wasn’t quite at the level of Duba Plains but it is still top notch and the highlights from Zafara stack up with anywhere else.  One morning our guide spotted a female lion in the distance on an island.  We crossed some high water to discover that she had four young cubs with her.  Then her stance flipped from relaxed to focused as she spotted a lechwe that had become separated and hence vulnerable.  We watched in awe as she slowly stalked the antelope while her cubs seemed on the precipice of ruining all her work by frolicking and playing with each other.  In the end it was not enough to save the lechwe and we saw in the distance as the lion made its move.  It had gotten quite close and after a short chase brought down its prey masterfully.  Truly stunning to watch from beginning to end. 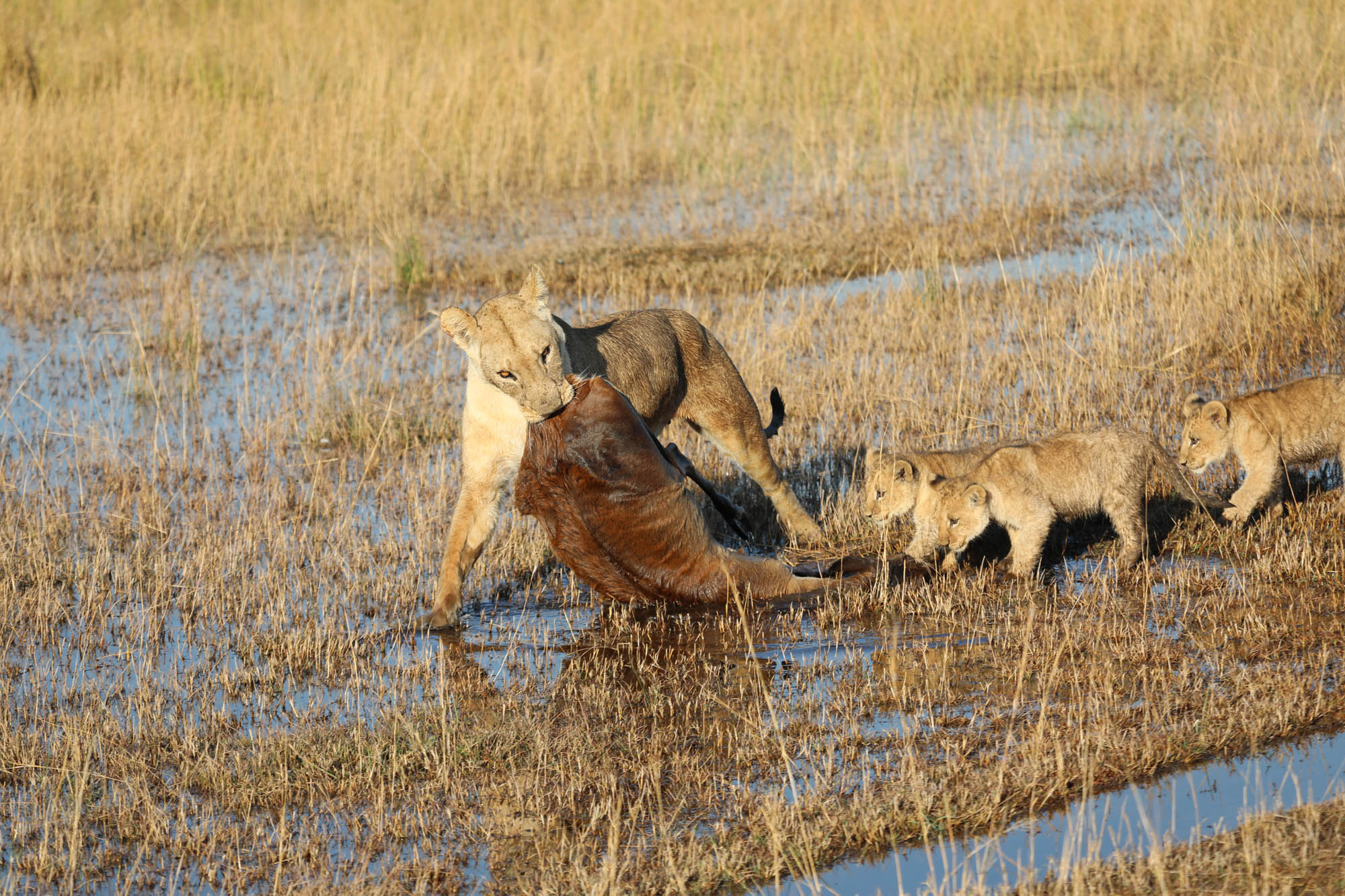 After a show like that we assumed we had used up our fair share of luck for the day, or perhaps week, so when Joseph spotted some leopard tracks we were pleasantly surprised.  He went on to track it for what seemed to be an eternity.  Then he took out his binoculars to scan the area and spotted the quarry sitting still in a bush on a raised mound. A singular guiding accomplishment! We again crossed some deep water and again watched as the cat spotted a potential meal.  This time the antelope - a reedbuck - spotted the lurking danger and escaped.  We followed as the leopard skulked off and eventually found a tree to its liking that it hopped onto, posing for some pictures on each branch. 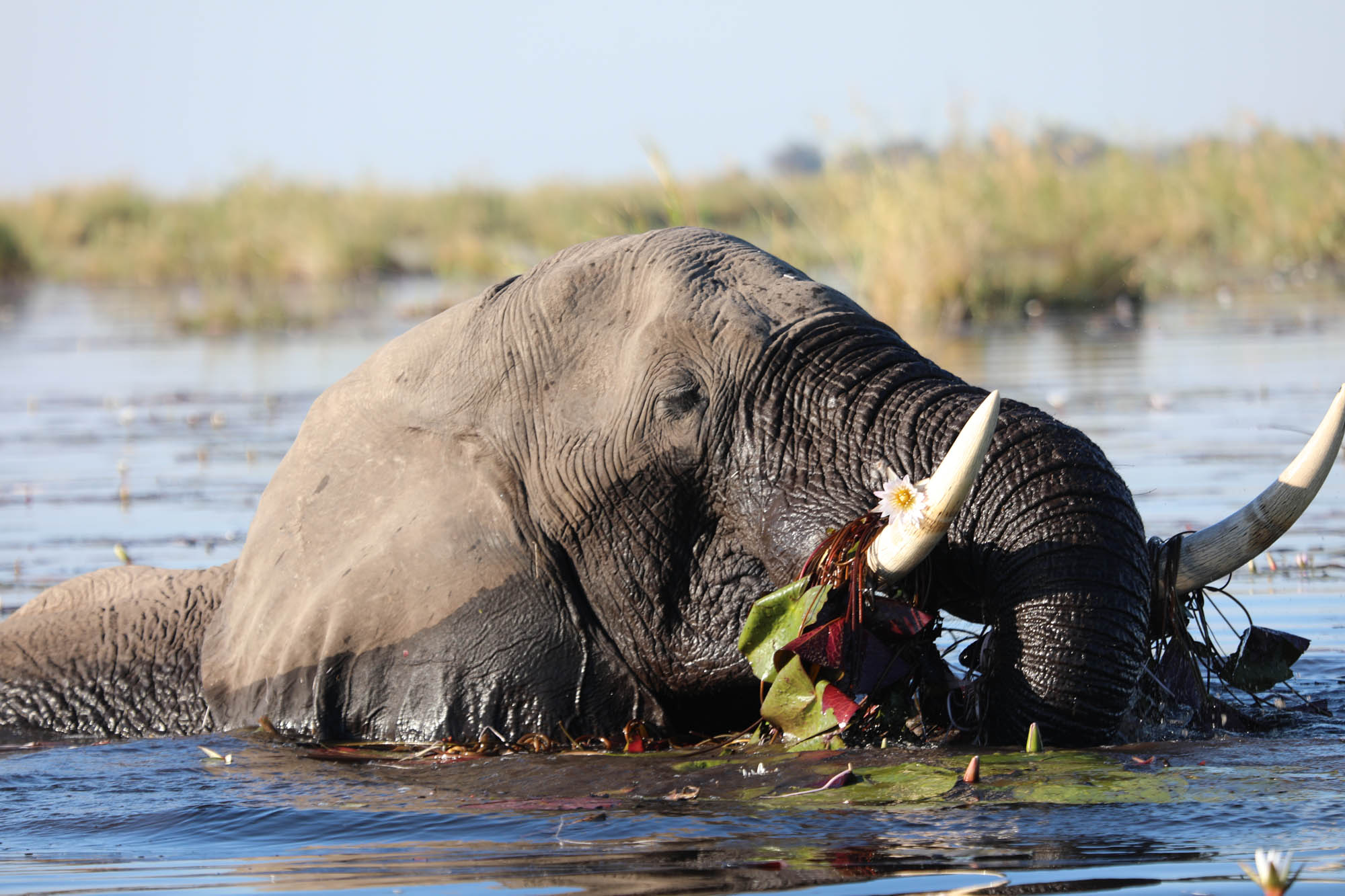 We were also able to do an evening boat activity from which we observed three adult male elephants feeding on floating grass and water lilies in some deep water.  One in particular made for a great photo opportunity as many of the lilies got tangled up on his tusks, as he continued to feed.  On the same ride my wife and I did a little bit of fishing.  Each of us caught a couple of tiger fish even though they become more active in the hotter months such as September and October. 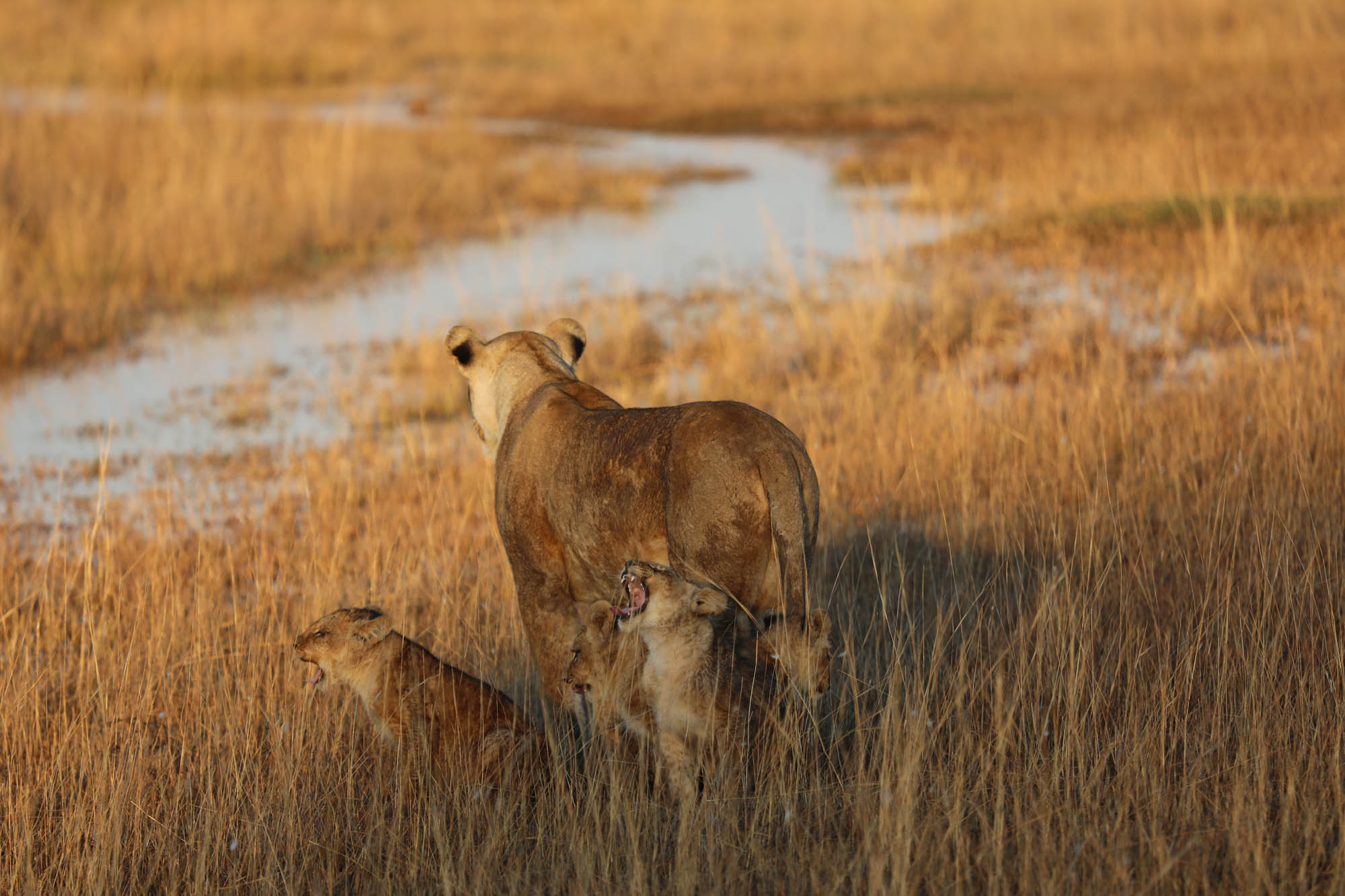 It was another fantastic stay with Great Plains and I am coming home very impressed with the experience.  They really checked all the boxes and if you are able to work in some of their camps in future itineraries, I am sure you will feel similarly.” 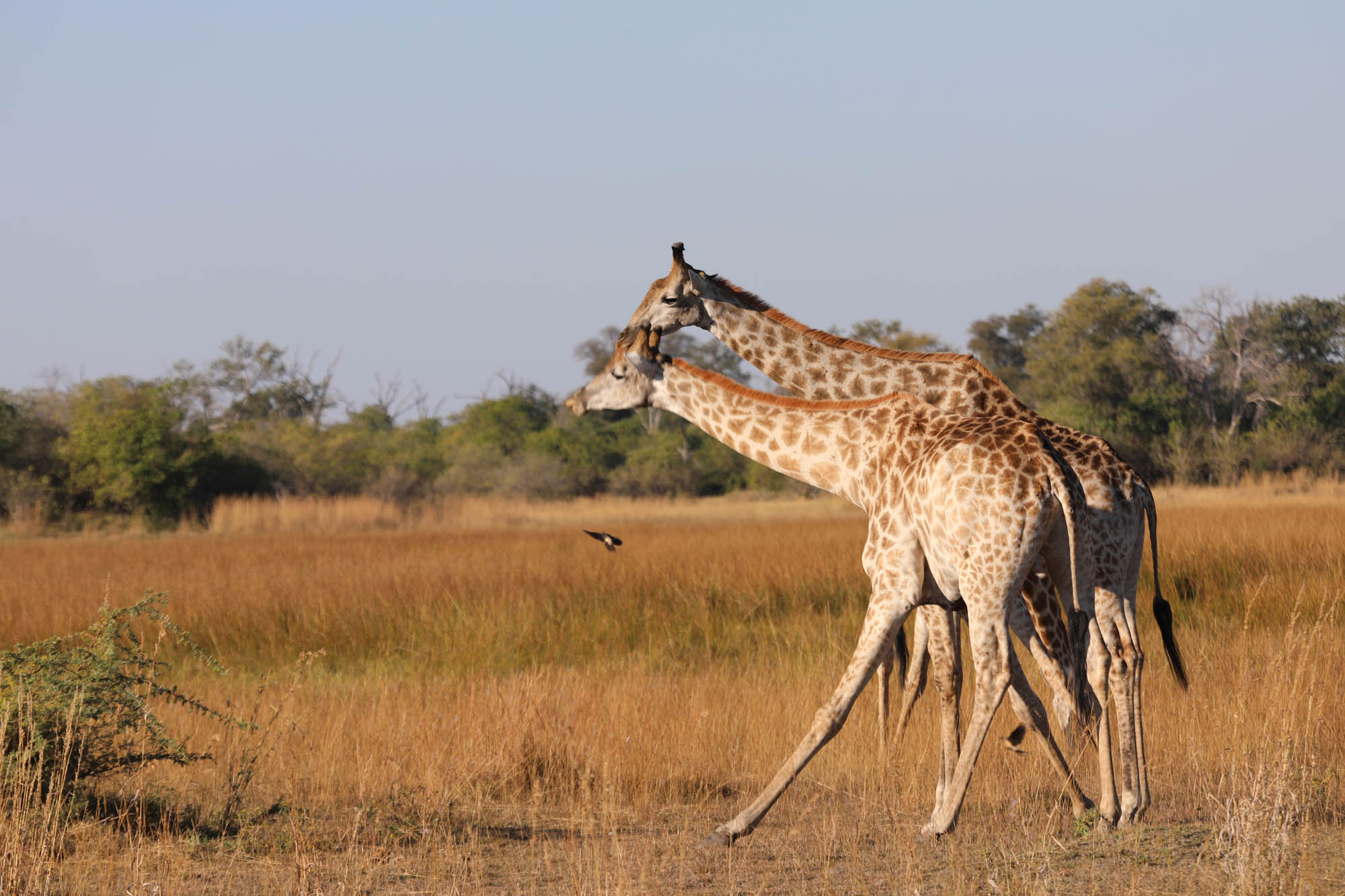 A cheetah hunt - and kill

On Bert’s earlier visit to Zarafa, he witnessed his first cheetah kill.  Here is how it went down:

Our afternoon game drive was uneventful to start. Some giraffe, kudu, impala, zebra, wildebeest – the usual suspects. Then we drove into an area which looked very promising for cheetah and lo & behold during a short stop looking for something else I picked up a cheetah in the binoculars, while scanning the terrain! There they were, a coalition of two males: not at all fussed with our presence. We followed them around and watched them settle in, at least for a while, on a large termite mound. Soon enough the light started to fade and we headed back to camp. En route, we were treated to a very enjoyable bush sundowner. 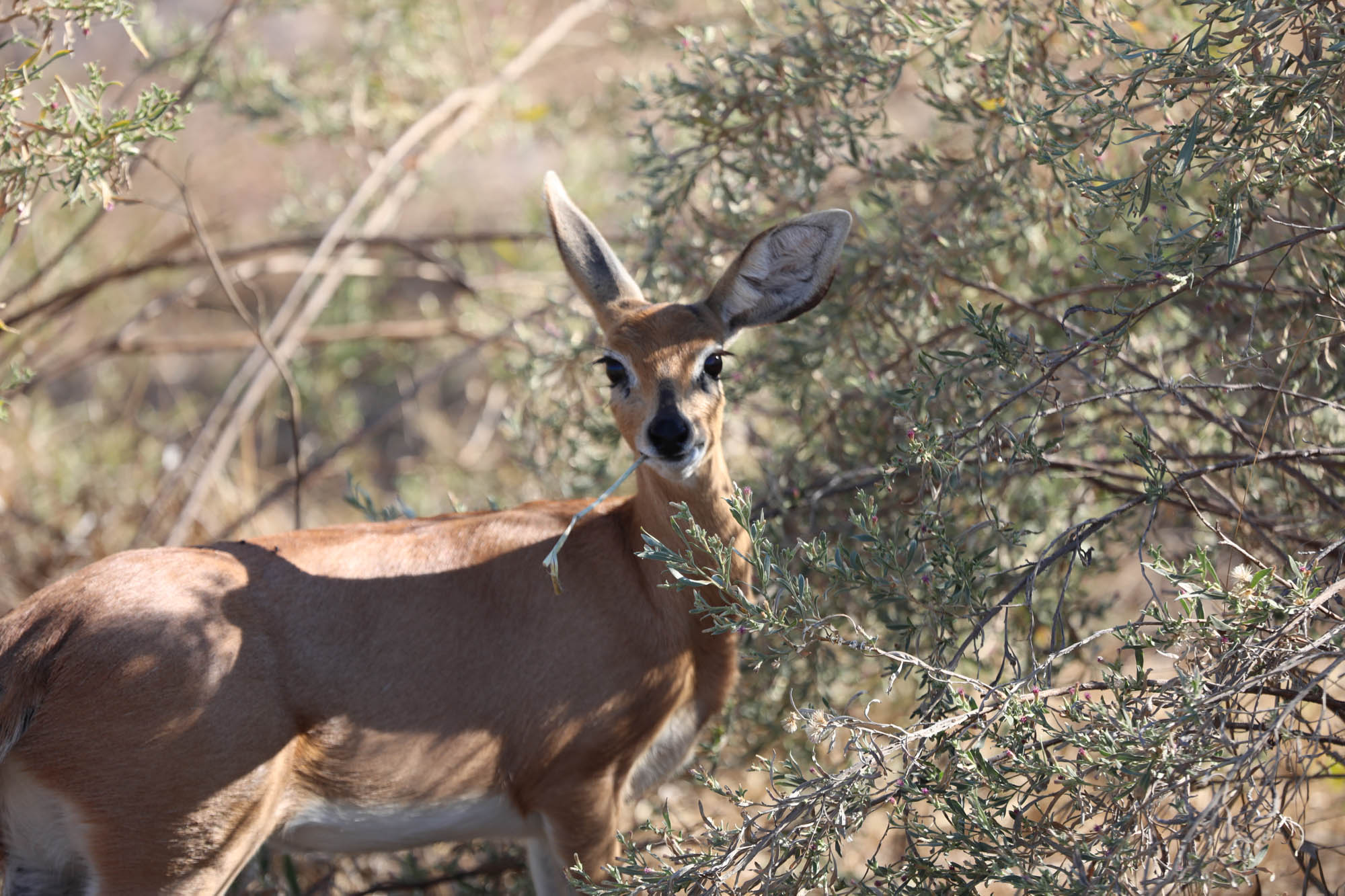 The following day was one of my best days on safari yet in Botswana. We headed out fairly early that morning to see if the cheetah brothers were still around. Taking our cue from some staring giraffes, we soon located them sleeping in a small depression not too far from where we had left them the previous day. We then proceeded to stay with the cheetah from about 0800 until past 1100. It was clear that the cheetah were – at least initially – not in a good position to hunt. There was a lot of open flat terrain between them and their prey species which included impala, young zebra and juvenile wildebeest. So if the cheetah commenced a hunt, the zebra would no doubt bolt and scatter all the other game as well. 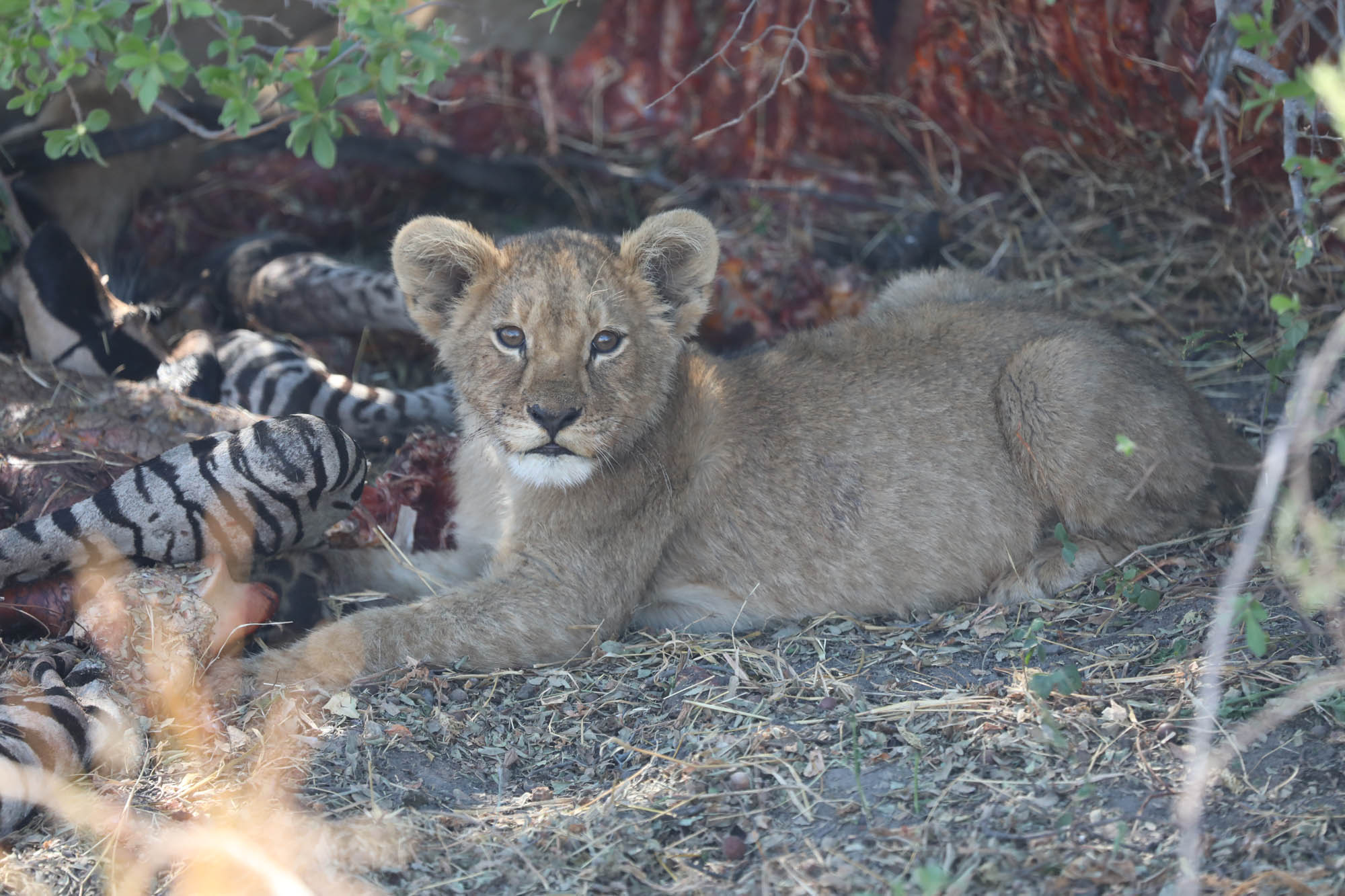 As a result the cheetah took their time and it wasn’t until well after 11 that morning that they made their move. First they moved to a different position under a tree, and rested there for quite a while until the zebra had moved out of sight.

Then – as if by unspoken signal – the cheetahs got up and started walking deliberately towards the line of vegetation where there were several impala visible. Suddenly the cheetah accelerated, the impala scattered and I momentarily lost the big picture, just catching a glimpse of a cheetah wheeling to the left, its tail wildly swinging to the right as it honed in on a fleeing animal temporarily obscured behind a bush. 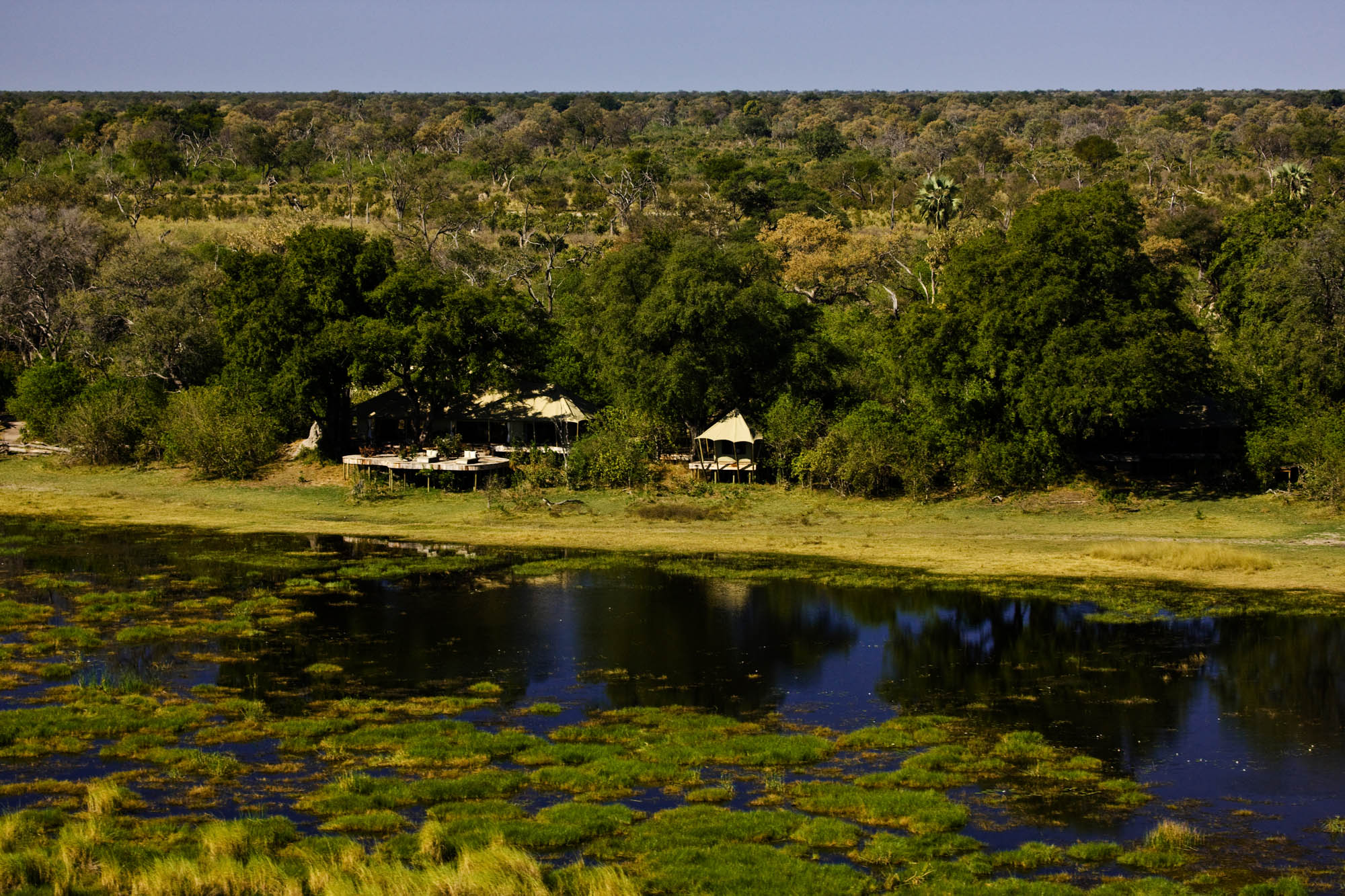 Our guide started up the vehicle and we raced to the scene. Just 20 seconds later we came up on the impala which had been taken down. One of the cheetahs had it in a death grip with its jaws clamped around the impala’s throat, suffocating the hapless animal which was no doubt in a state of severe shock, unable to feel pain. Almost simultaneously the  cheetahs started to feed on the impala which they had by now dragged into cover, so as to avoid being seen by other land predators or from the air by bateleur eagles or vultures.

At first one and then another would act as a sentry of sorts. Interestingly they did not use their paws in the act of feeding; just their jaws, head and neck being in motion. 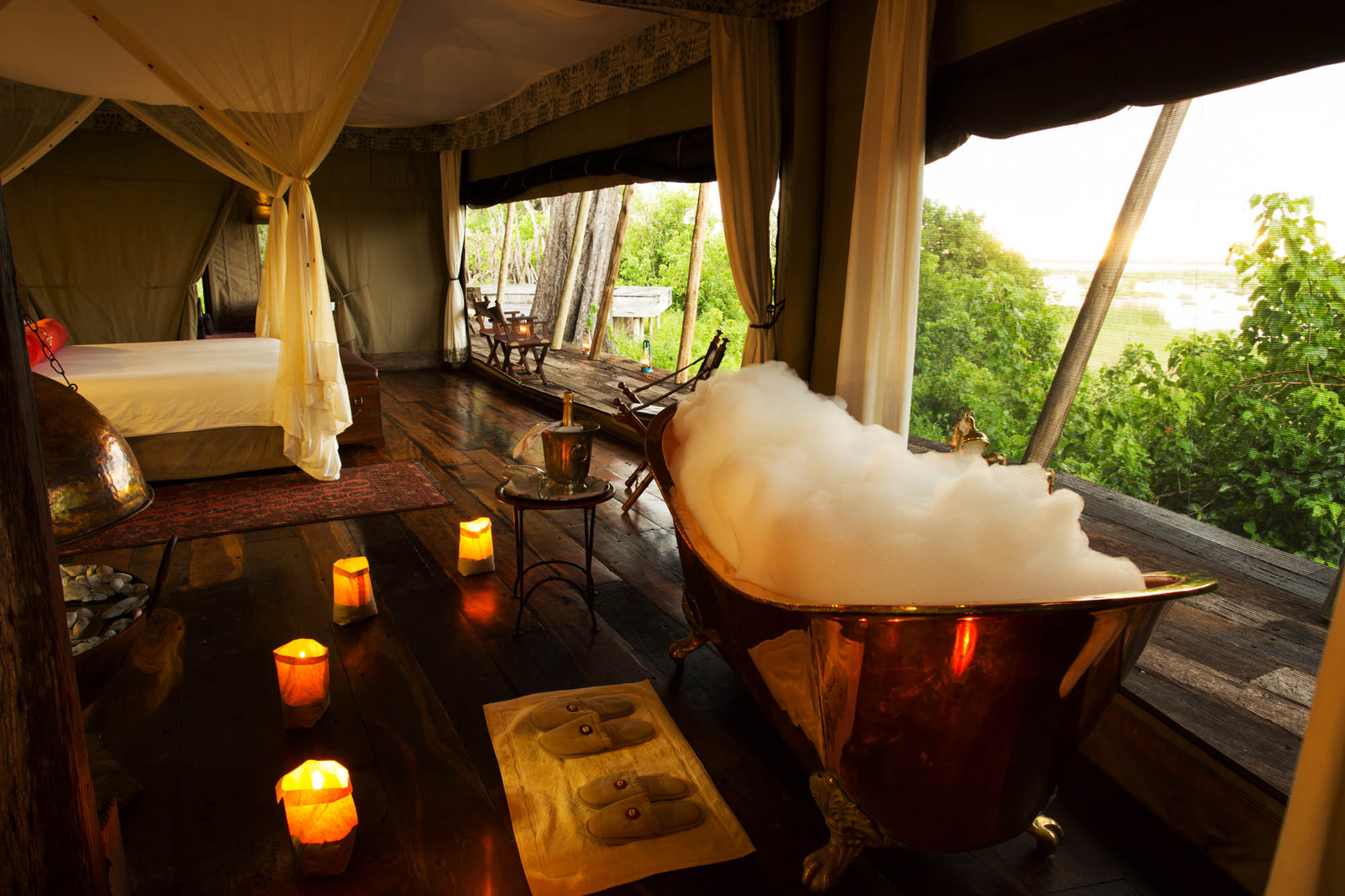 It was truly an awesome spectacle to behold and to listen to and we spent the better part of 20 minutes watching as they devoured a good chunk of the impala, occasionally lifting their bloodstained heads to momentarily stare outwards, before lowering them again and tearing away yet another mouthful. I could see one of the cheetahs considering opening a new spot on the impala’s yet unmarked shoulder. After one or two half-hearted bites he just walked away from the carcass, clearly having reached the point of satiety.

We were getting somewhat peckish ourselves by then, so we left the cheetah in peace and returned to camp for brunch.